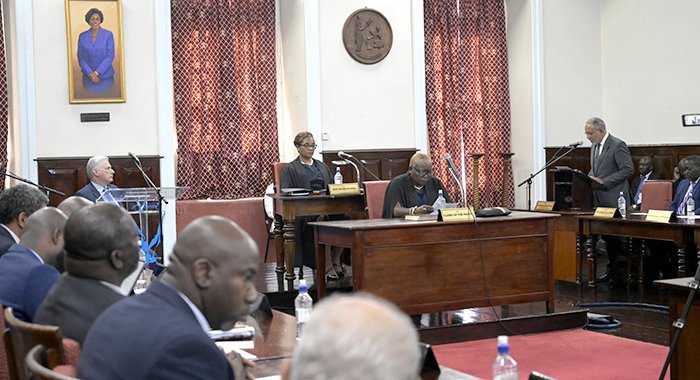 Leader of the Opposition, Godwin Friday, on Monday, extended “open arms of friendship” to President of Cuba, Miguel Díaz-Canel, his delegation and the Cuban people as the Cuban leader addressed the Vincentian Parliament.

On Monday, Díaz-Canel wrapped up a three-day official visit to St. Vincent and the Grenadines (SVG), becoming the first Cuban leader to do so.

On Monday, there was a special sitting of Parliament which heard addresses from the visiting leader as well as Friday and Prime Minister Ralph Gonsalves.

Friday said the Vincentian people are grateful “for the strong bonds of cooperation and friendship that have developed between our two countries.

“Those ties go back decades to a time when such relations that now seem so natural and fitting were questioned by others as perhaps not being in our best interest. But we persevere and here we are better for it,” said Friday, who was first elected to Parliament in 2001.

“That bold and visionary initiative by then Prime Minister Sir James Mitchell and an NDP government opened the way for better understanding between us and for much more,” he said of the establishment of diplomatic ties.

“It was born out of a profound appreciation of the importance of partnership and friendship among Caribbean people. While acknowledging our differences and unique challenges, our predecessors fully understood that better understanding and cooperation held limitless possibilities for our progress and prosperity,” the opposition leader said.

He said that since then, both countries have strengthened the bonds of friendship and cooperation.

“Your country trained many of our doctors who have returned to work here and serve fellow Vincentians and you have sent many of your own here to give of their skills and talents,” Friday said.

He said that the Vincentian people have benefited from numerous scholarships offered by the Cuban government, adding that engineers, architects and other professionals trained in Cuba have contributed immeasurably to the development of SVG.

“Your generosity towards us has proven that wealth in the heart is greater than wealth in the treasury of nations. For with limited resources, you have done far more for us than many friendly countries who have greater means. We will not forget that,” he said.

Friday said the last two years have been very challenging.

“The COVID-19 pandemic severely damaged our society and economy. It demanded much of us and will continue to do so for some time to come. We continue to pray for complete recovery and better times.”

He further spoke of the April 2021 eruption of La Soufriere, saying that the volcano “chose an already difficult time to remind us of its potent presence among us”, destroying livelihoods and property.

“You stood with us then as well,” the opposition leader said.

He further spoke of the war between Russia and Ukraine.

“Though far away from the cauldron of conflict, we have nevertheless been affected by the economic fallout that has caused material shortages and higher cost of living for people the world over, including our own people,” Friday said.

“The poor nations and the poor people in the regions have felt it the most. We pray that peace and justice will return soon to that part of Europe and to every corner of the world where there is conflict. In this modern age, a time of enlightenment, let us agree that war is an abomination that humanity must consign to the dustbin of history. And the sooner the better.”

Friday said that Cuba has taken a leading role in helping and supporting countries in the Caribbean region.

“Your generosity to us in St. Vincent and the Grenadines has been exemplary. You have done it, I believe, not for thanks or praise but from a genuine desire to be of service to us and to humanity.

“When I reflect on our relationship as people together, finding our way in the world, I am satisfied that there is much for which we can be proud.”

He said that over the years, Kingstown-Havana ties have expanded “from the tentative and polite confines of diplomatic relations to genuine friendship, and kinship.

“As noted, our peoples are connected and our lives are intertwined, more than ever before. Long, may we continue to work together for our mutual prosperity and progress,” the opposition leader said.

“We have learned from our experience and the experience of others that history is not an autopilot and destiny is not gifted to us. We must shape the future ourselves. We can do this much more effectively when we have a common understanding of our challenges and opportunities and work together to make the best of them,” Friday said.

“As Caribbean people we share more than just the seas around us. We share dreams of a prosperous future in a just and peaceful world. And accordingly we must look out for one another.

“Mr. President, when you return home. Please convey our love and friendship to your people. Wish you a safe and fruitful journey wherever you go. And God bless us all,” the opposition leader said.