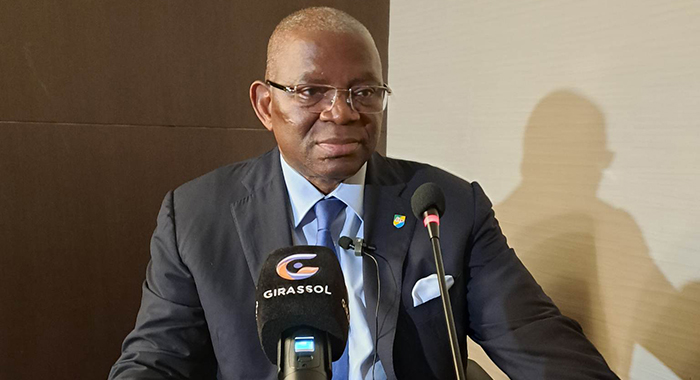 Georges Chikoti, secretary general of the Organisation of African, Caribbean and Pacific States.

LUANDA, Angola (CMC) — The Secretary General of the Organisation of African, Caribbean and Pacific States (ACPS), Georges Chikoti, says the 79-member grouping remains relevant 47 years after its founding and even as South African, one of the largest contributors to its budget, left the bloc in September.

Chikoti, fielding questions from the media ahead of the two-day 10th Summit of OACPS Heads of State and Government beginning on Friday, said whether or not the OACPS remains relevant is “a question that we have also been asking ourselves, and many people have been asking us this question.

“But I believe that because of the issue of listing some countries, the AML/CFT (Anti-Money Laundering/Combating the Financing of Terrorism) issues, and the fact that we have concluded this post-Cotonou partnership agreement and that because we have also agreed that there is a field of cooperation between us, between our countries and the international community globally, I think that there is an important role,” the Angolan diplomat said.

Chikoti said people probably have not noticed that the OACPS is the only forum in which people from Africa, the Caribbean and the Pacific, which are home to the people most affected by climate change, “can meet and discuss deeply their issues.

He said that with the crisis in Ukraine, where Russian troops have invaded the Eastern European country, it is because OACPS leaders have spoken that the world has come to understand the importance of issues like food, and fertilisers that OACPS countries need.

“So I think that if we have been able to stay together, it’s because we are relevant. And they know that the fight against us does not only come from around us, but it’s also because sometimes it is difficult to pursue the important negotiations and the kind of relationship that we have been able to build over many years between our countries, and particularly Europe, but also now as we become an international organisation, where we have to be able to talk more about the issues that affect some of our countries.”

Chikoti said that maybe if the OACPS did not talk about issues affecting small island developing states (SIDS) — such as climate change — and how to confront them, “probably very little could have been done.

“And the only place we have been able to work on these issues, it’s because we’re in Europe, because the ambassadors in Europe do work particularly hard to make sure that, indeed, we are important.

“But even when you look at issues related to trade, most of our countries do export to Europe. And it’s because they can talk about some issues or policies on trade to European partners that we have been able to solve many, many problems. So I think the relevance is there. And indeed, I still believe that there is a role that has been very well played by our organisation. And I think that’s why we’re still there,” Chikoti added.

Regarding South Africa’s withdrawal from OACPS, Chikoti said the country has “the legitimate right to take a decision of its government to say where they want to be or where they do not want to be”.

He said South Africa is a very developed country, “which has its challenges at different levels, but they see it differently”.

The OACPS said South Africa is an important member of the BRICS group of nations — Brazil, Russia, India, China, and South Africa — in which it played a role and its own agreement with the European Union.

“So again, it has very well defined its way of looking into its future. But the OACPS has 79 member states, who feel that it’s important for them to stay together. You have also many other big countries, like Angola, Nigeria, Kenya, who are still members of the OACPS. And I think that the reason is the fact that these countries of the OACPS do look at their realities differently.”

Chikoti said that while these countries’ revenue seems to be showing that they are rich countries, “they still need an area of solidarity, where they can get support from other countries to be able to fight for a number of battles.

“Don’t forget that the global world is a difficult environment, countries need to be able to fight to survive, to maintain their positions. And whenever things are not so real, they will need to seek support from other countries,” Chikoti said, noting that the Maldives is joining the OACPS.

He said he does not believe that there was not a problem that could have led to South Africa’s decision to leave the OACPS.

“But we respect South Africa’s decision. And then I think that other member states have decided to continue and we see where the organisation goes…

Chikoti said the Council of Ministers of the OACPS has been discussing the issue of South Africa’s withdrawal for quite some time.