Cuss out on Facebook leads to defamation judgment against Bagga woman 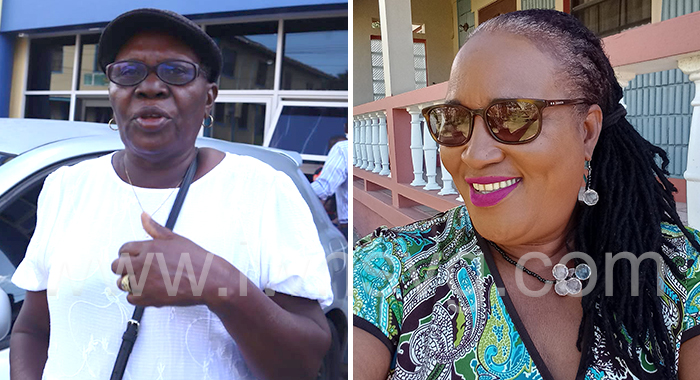 The plaintiff, Veronica Solomon, left, and the defendant, Wena Roberts.

A row that erupted on Facebook over a video in which a Barrouallie woman was filmed lifting up her dress, revealing her tights, has resulted in her having to pay EC$5,062 for defamation.

However, while Solomon brought two defamation actions against Roberts, the court only awarded damages in one, ruling that one action could have been brought.

In handing down his ruling, Burnett noted that the matters came about because of a publication on Facebook.

In the first claim, Solomon, who was represented by counsel Duane Daniel, alleged that Roberts, in her Facebook post, defamed her by accusing her of having committed a criminal act.

In relation to the second claim, Solomon alleged that Roberts’ words had caused her to lose her reputation and subjected her to ridicule.

Burnett noted that Solomon is a 65-old-vendor, of Barrouallie, with eight children and is unmarried. She commenced training, which, if she had successfully completed, would have made her a nursing assistant.

In her evidence, Solomon told the court that she failed her exam and never obtained a nursing license.

She denied having committed the act that Roberts alleged, adding that since she never had a nursing license, she could not have lost it, as Roberts also alleged.

Solomon said she saw the video on Facebook and understood the words spoken by Roberts to be associating her with a criminal offence.

She said she felt bad and friends told her about it in the market.

When Solomon testified in the matter, the video was still on Facebook and had been viewed 9,000 times.

Regarding the second claim, Solomon said that Roberts used certain words that made certain suggestions about her morality.

She said that Roberts had attempted to take her clothes off during a protest in front of the Court House/Parliament building in Kingstown and people, including Solomon’s son in Canada, commented about it on social media.

During cross examination, Solomon gave her interpretation of two of the terms that were used in Roberts’ video.

She testified that she has eight children fathered by six men and denied the allegation Roberts made about her.

“When a relationship finished, I started another one,” Solomon told the court.

A witness for Solomon told the court that she heard the recording and understood Roberts to have been speaking about the plaintiff.

She testified that by September 2022, the Facebook live video was still on the platform and had been viewed over 9,000 times.

The witness said that after the video appeared, she heard people making about Solomon the same allegation that Roberts had made.

The witness said she had not heard people make the allegation before Roberts’ video.

In her defence, Roberts, who was represented by Counsel Chelsea Alexander, testified that a law on mandatory vaccination was about to be passed in Parliament and she was among people gathered outside the Parliament protesting the measure.

She  said she saw “a battalion of police with shields and batons” and was intimidated, knowing that it was her right to protest.

Roberts said that at one point, the police approached her and “at the moment, I was not there”, which the court said suggested that she probably lost it for a moment or two.

She said the police held on to her and she thought she was going to be arrested and she tried to pull her dress up.

Roberts narrated the words published by Omar and said she reacted to Omar’s words.

She admitted that she published the words about the plaintiff but said that they were true. Roberts said  it was “a big thing in Barrouallie” and she was going to school at the time.

Regarding the second defamation suit, Roberts said that the things she said about Solomon, resulting in the lawsuit, were also true. She spoke of Solomon’s children and their fathers.

Roberts also called a witness to testify on her behalf.

In explaining his decision, the magistrate quoted the case of Jennelle Burke, in Trinidad, where the court held that in light of the advances of technology, libel and slander could no longer be viewed as strictly the spoken word versus the written  word.

“The format into which statements can be reduced so as to be considered to be in a permanent form has evolved and extended way beyond the sphere of written or typed text,” the court said.

It further said that audiovisual and electronic form are capable of having a degree of permanency and transcend geographical borders.

“In this context, the law in relation to libel and slander can no longer be viewed through the myopic lens of written words versus spoken words as technological advances has created circumstance by virtue of which the spoken word can be easily encrypted into a permanent, irreversible format, which can be accessed from the global platform,” Burnett said, quoting the Trinidad decision.

The magistrate said that in a defamation case, the plaintiff is required to prove three things to obtain judgment and an award of damages:

He said that from the evidence, the court concludes that the words were defamatory of the plaintiff.

“The defendant did not provide evidence to the court to satisfy the court that the allegations were true,” he ruled.

Burnett said that even if Roberts had an issue with Omar and Omar defamed her, defaming his mother was not the way to solve the issue.

“The court is of the view that having eight children for six men does not make you ****,” Burnett said, quoting one of the words that Solomon complained of.

“The plaintiff said she ended the relationship and started another. Having eight children for six men in itself does not make the plaintiff a loose and immoral woman. It could also be that she was unlucky and kept searching. One relationship after another does not make one a ****. Against that background, the defence of truth fails in both claims.”

He said the aim of an award of damages is to compensate the plaintiff for injury to her reputation.

Burnett said that in cases of libel and those of slander, which are actionable, the law is  that the plaintiff’s reputation would have suffered some damage and so for that, damages would be awarded.

He said he also took into account the persistence of the defendant on her plea of justification, which eventually failed.

“Although two claims were filed, it is clear to the court that one claim could have been brought as the defamation occurred in the same publication.”

He said the Small Debts Act prohibits the splitting of cause of action. hence, the court would only be making one award by entering judgment in the sum of EC$5,062

Roberts was not in court when the judgment was handed down, as one of her relatives had died.