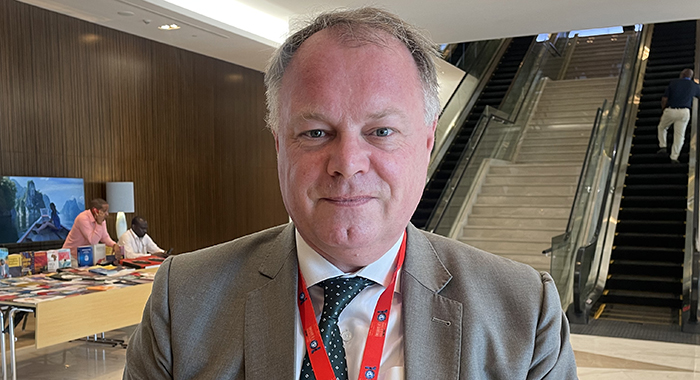 LUANDA, Angola (CMC) — The Netherlands-based  international network of Christians and conservatives that seeks to influence policy from a Christian perspective is urging the 79-member Organisation of African, Caribbean and Pacific States (OACPS) to delay signing with the European Union the proposed new agreement to guide their relationship over the next 20 years.

van Schothorst said that the agreement, aka the Samoa Agreement/Post-Cotonou Agreement, should receive parliamentary approval in each OACPS country before heads states and government sign it.

His call comes as one EU nation has expressed reservation about signing the deal, even as Secretary General of the OACPS, Georges Chikoto urged the European Union to sign the agreement as soon as possible.

Speaking on the sidelines on the closing day of the 10th Summit of Head of States and Government here on Saturday, van Schothorst  told CMC that his organisation was founded while he was working in the European Parliament Foreign Affairs Committee.

He said he saw that the European Commission “has a lot of power to initiate all kinds of legislation, which is, in my opinion, insufficiently controlled by the European Parliament and national member states”.

The new deal between the European Union and the OACPS replaces the Cotonou Agreement, which van Schothorst told CMC “was not with all kinds of so-called human rights issues because there is no unity of opinion on human rights also in the EU”.

“And we say there is a right to life for everyone — born and unborn. So they put that intentionally, I think, in the treaty and it was overlooked by the Secretariat, I think. Because if you have legislation in your countries, which is contrary to this package of legislation, it should not be in a treaty. It is a trade treaty. So what has l sexualising children to do with trade? Nothing,” van Schothorst told CMC.

He said a clear example of the EU trying to impose its valueS on ACP countries is that the agreement was written mainly by the EU and then  negotiated with the OAPS Secretariat in Brussels, “with possibly some disconnect with the national capitals where were not enough, I suppose, from the content, the serious problems in this treaty, and concerning all kinds of ethical and moral issues, which are in the treaty”.

van Schothorst  told CMC that his organisation scrutinised the proposed agreement when I became public on April 15 last year.

“… actually, we were called by an African former UN diplomat who had scrutinised the treaty and he was shocked by the content. And he asked us, please also look at it, so we did,” van Schothorst   said.

He said his organisation found in the document “all kinds of ethical things which are against legislation in most ACP countries, like abortion, promotion of LGBT issues, comprehensive sexuality education, so that the parental rights are at stake”.

According to van Schothorst, as an NGO, Christian Council International did not have a voice at the summit.

“I was just here to raise awareness among the delegations of the ACP countries and just to help them understand what was in the treaty and what’s against the national legislation.”

He said his organisation’s proposal is for the agreement to be first sent to national parliaments to be scrutinised to see if it is “in line with legislation which is nationally and democratically agreed in the countries and then give them six months for scrutiny and then bring the results back and discuss them in the next joint Parliamentary Assembly with the EU”.

van Schothorst said this would give national assemblies to say, “this can be in and this cannot be in.

“So if you put out the human rights as defined by the EU in the current text, which cannot be changed, but is legislation in their countries if it is signed, so you should not sign that. I think my advice would be sent to the parliaments.”

He said that some delegates at the summit were surprised to have learned that the issues he raised were included in the new agreement.

“They took it very seriously… And, yes, some said, ‘Yes, the EU has the money and they have the power to impose all the bad things on us. And what can we do?’ And others said, ‘Oh no, we should look carefully at it and may refer it back to the parliaments.”

van Schothorst told CMC that another important issue is that of national sovereignty and division of the ACP, with the EU in the driver seat.

“And I think that the ACP countries have a sovereign right to decide on their own legislation. In the new proposed treaty, the ACP is cut up in three different parts with an EU-Africa protocol, EU-Pacific protocol and EU-Caribbean protocol with the EU, with everyone, in the driver seat.”

He said that in this way, the bargaining power of the ACP countries “will be severely broken or damaged  by this treaty and I think you should not accept that”.

van Schothorst told CMC that Hungary is the EU nation that has resulted in a delay in the agreement being signed, adding, “I’ve also been in Budapest and they have their, I think, right objections to several parts of the treaty. So there is no unity in the EU.”

He further said that in the European Parliament, there were several parliamentarians who have asked critical questions on this treaty to the European Commission. So, in the EU, there is no unity and in many ACP countries, what I hear from it, both from the Pacific but also from the Caribbean, and also in Africa, there are serious, serious concerns.”

van Schothorst  said these countries “admit they don’t know what to do, and a possibility to act is to not accept the text as it is because it’s not in line with the countries’ legislation and culture and traditions”.

He emphasised that the approach should be to send the agreement to parliaments in OACPS countries for approval.

“… sign only to agreements which are in line and respect everyone’s opinion… I will say your children are not for sale for these kinds of ideologies, which will be imposed, which needs to be implemented in your countries if you have signed the treaty, save your children,” van Schothorst told CMC.