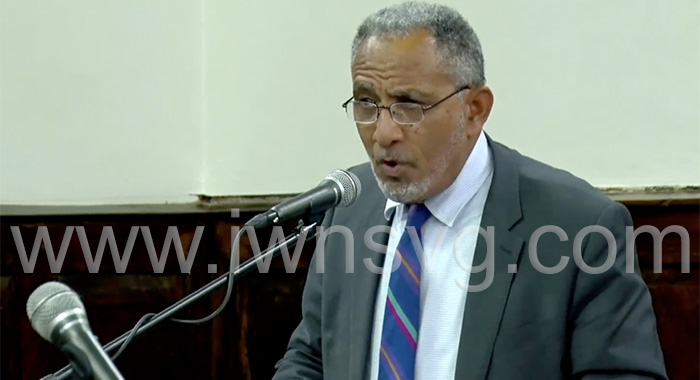 Opposition Leader Godwin Friday has called on Minister of Finance Camillo Gonsalves to say which programme he will cut from the “bloated” 2023.

Parliament has approved Estimates of Revenue and Expenditure for 2023 of EC$1.45 billion, paving the way for the presentation of the budget on Jan. 9, 2023.

Minister of Finance Camillo Gonsalves told lawmakers that the package includes Other Receipts of EC$225 million in the capital budget.

In summing up the debate, he accused the opposition leader of reciting “a series of cliches” and focusing on shortfalls of 2014, rather than 2021, where BRAGSA received in excess of its budgeted subvention.

Responding to the Estimates, Opposition Leader, Godwin Friday told lawmakers that bloating the fiscal package “is deliberate, it’s not a miscalculation or best wishes.”

Friday said that even though the Budget cannot be implemented, it is bigger every year.

“This year is bigger, bigger than last year, the Estimates bigger. Bigger, presumably, is better. Even though it cannot be implemented because of a lack of money,” the opposition leader said.

He said there is also the problem of implementation capacity, adding, “but we don’t even have to go there.

Friday said opposition lawmakers have spoken repeatedly in Parliament about “the bloated nature of the budget; the hoax that is attempted to be played on the people of this country.

“And yet, nothing, over the years, has been done. It just simply is brushed aside,” he said, adding that is also what happened when the finance minister presented the numbers on Wednesday.

“The minister was outlining capital receipts. And then he took the time to disaggregate, to break down, some of the loans and grants you get it from various countries. And one of the largest items in the capital receipts, EC$255 million, was Other Receipts and he was absolutely silent on it.”

The opposition leader said Gonsalves gave no indication as to where that EC$225 million is coming from.

“The government says it expects to have EC$1.44 billion in revenue to spend. But we know in reality it doesn’t have that because we have an overall deficit, which is comprised of the current deficit of EC$10.3 million — and you add amortization costs, the repayment of debt of EC$180.6 million plus the sinking fund allocations of EC$22 million dollars and you have a total overall current deficit of EC$212.8 million — nearly 15% of the overall budget.”

The opposition leader said since the finance minister was mum on this, “nearly 15% of the budget will not be funded”.

“That means of all the things you see, when we look through this document here, … the overall context is that you have to subtract nearly 15% of the budget.

“Which programmes are going to be cut? That’s what they ask us. They say, ‘Well tell us what to cut.’ We are not saying cut anything. I say, implement everything. We want the people of this country to have the benefit of the programs that are being implemented capital, or the ones on the current expenditure side.

“I don’t want you to cut anything. But I’m sceptical because it doesn’t inspire confidence that you have the money.

The opposition leader said the finance minister has a duty to tell the people “that the goodies that he has presented, the necessities that he provides here, that he has promised, which of those things will not be delivered.

“You can’t just say to people, you will know it when you feel it. This is not good planning.”

Friday invited Gonsalves to call him out if his assessment is wrong.

He said that in light of the shortfall in what is budgeted and what the government reasonably hopes to receive, Gonsalves has three options.

“He could show where the money is coming from,” Friday said, adding, “But as we said earlier, he didn’t know, didn’t present that. You could break it down, give us some confidence that it is.”

The second option, the opposition leader said, is to say which programme or projects will be eliminated or reduced because the government does not have the money to do them.

“Be upfront and honest and stop promising what you know you can’t deliver. This is deceitful, it’s harmful. As it reduces public trust in government, and it breeds cynicism,” Friday siad.

“If you can’t save where the money coming from, admit it. Say, ‘Okay, and the Leader of the Opposition is right. But I presented a wish list, these are the things I would like to see happen but we don’t have enough money to do it. Instead, you given the impression that you’re going to do it. And you’re telling people you have a $1.44 billion budget.”

Friday said the third option is the best and simplest approach.

“… the honest approach is to prepare an accurate Estimates based on honest appreciation of the government’s finances, and what can realistically be achieved. What it would mean is that this year, the budget would be EC$1.27 billion instead of 1.44 billion because then you’re taking out the Other Receipts, which you know is not going to be collected,” the opposition leader said.

“That is only put there to pad and to balance the budget. In fact, I see here in the 2023 estimates, I don’t know how this possibly could happen.”

He said the government does not have the money but said the approved estimates for 2022 was EC$265 million in Other Receipts.

“But the revised Estimates suggested that it went up to 279 million. How is that possible when you don’t collect it at all? Unless that figure is simply a balancing device used to essentially hoodwink and try to fool people.”

He said that the finance minister should tell the people, “… this is the size or budget. In reality, it will turn out to be less. And hopefully, you will have the implementation capacity to put the capital budget into practice”.

The opposition leader said trust and belief in the government are important.

He said the government has an obligation to explain the ECEC$225 million shortfall in the capital budget and how this would affect its implementation.

“He owes the people of this country that. Even if you don’t want to tell us, you should tell it to the people.”

Friday said the problem is not a recent one, noting that in 2015, EC$12 million was budgeted for the Tourism Authority, which only received EC$4 million. Of the EC$20 million budgeted in 2017, the authority received only EC$7.5 million.

“That very important institution that is used to promote tourism overseas and develop our tourism product. any wonder that we still lag behind everybody else,” Friday said.

He said the same thing go with BRAGSA, the state company responsible for the maintenance of roads and other public infrastructure,

“So that’s how it affects the services that are delivered and accounts for the poor conditions of our roads. So, it also affects what happens in the hospitals and the schools; the potholes are on Kingstown. the fixing of an area in front of the jetty in Port Elizabeth — one of the most busy pieces of infrastructure owned by the government in the country and instead of paving, you’re putting dirt down there to create more mess because you don’t have the transfers necessary to fix those things,” the opposition leader said.

“The minister is out of touch, obviously…” Friday said.