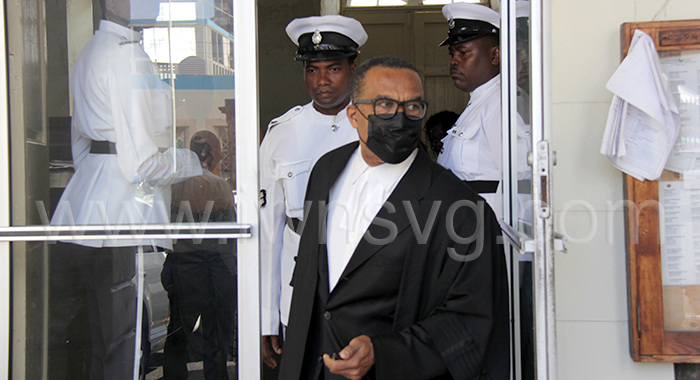 Defence counsel Michael Wyllie leaves High Court No. 1, in Kingstown after Justice Brian Cottle ordered police to escort him from the courtroom on Friday, Dec. 16, 2022.

The development came moments after the judge told the lawyer he would not allow him to appear before him again unless he apologises for his conduct during the Veron Primus murder.

“I cannot end this matter without placing on record my view of the conduct of counsel for the accused,” Justice Cottle said after sentencing Primus for the November 2015 murder of real estate agent, Sharleen Greaves.

Justice Cottle said that throughout the trial, Wyllie “displayed an attitude of gross disrespect for the court”.

He said that on one occasion, the disrespect “even extended to counsel simply getting up from the bar table and walking out of the courtroom during the testimony of a witness without a word of explanation”.

The judge said that on another occasion, the trial was adjourned for lunch and scheduled to resume at 1:30 p.m.

“In my view, his behaviour at the trial fell far below the standard expected from an officer of the court,” Justice Cottle said.

He said he opted to ignore this during the trial, mindful that a citation of Wyllie “for his blatant contempt of the court” would have derailed the trial and deprived Primus of legal representation.

“But the trial is now ended. Until counsel purges his contempt with an appropriate apology in open court, I will not permit him to appear before this court in any other matter,” Justice Cottle said.

In response, Wyllie told the judge there were a number of aspects of the case which he would appeal.

“You were unfair in this court case,” Wyllie told the judge.

“You were biased against the accused,” Wyllie was saying when the judge interrupted him, saying, “Mr. Wyllie, you are in contempt and you are on very thin ice. I suggest that you say nothing else at this stage for your sake.”

At this point, counsel Grant Connel, who was in court but was not wearing a jacket or robe, approached the Bar table and spoke to Wyllie in a muted voice.

Wyllie then put down the microphone and sat down, and the judge said, “I’ll rise here.”

The sitting was adjourned for a few minutes and when the court resumed, it proceeded to a bail hearing, an in-chamber matter, from which the public is excluded.

However, Wyllie later confirmed that the judge ordered that the police remove him from the courtroom.

Speaking to iWitness News after his expulsion from the courtroom, Wyllie said he would not apologise.

“Apologise for what?” he told iWitness News. “There is no basis for an apology.

“That isn’t contemptuous. Because I disagree with him? So you’re saying the only person that should disagree with the judge is the Court of Appeal? Is that what he’s saying?”

Asked to comment on the two specific instances cited by the judge, Wyllie said:

“I apologise for returning late after I came back.”

And, regarding walking out of the court during the trial, the lawyer said:

Wyllie complained during the trial about back problems and travelled overseas for medical attention after the trial ended in July, resulting in the sentencing only taking place today.

He said that he had been sitting in court for too long and when he got up and went outside a video recording of the police interview with his client was being played.

“I have a copy,” he said, noting that a copy of the video was disclosed to the defence.

“I had looked at that video recording three times. So there was nothing that was being said there that I would not have known.”

iWitness News asked whether or not defence counsel is expected to be present at all time during a trial of their client.

“But there was nothing going on there that I didn’t know about,” Wyllie said about the recording.

iWitness News noted that the judge had commented that by walking out of the courtroom when the trial was taking place, Wyllie had left his client unrepresented.

“The interview was being played, which I looked at, had viewed three times before coming to court. … I just say let me just go out for a quick walk to ease the pain on my back,” Wyllie said.

He said he did not want the trial to be suspended briefly.

“Because as I said, if someone was giving evidence, I would have asked. But because I saw the video recording, there was no need to ask for a suspension.”

iWitness News asked Wyllie to consider what would have happened if, for some reason, the recording played during the trial was different from the one he had seen.

The lawyer said he was representing another accused on Friday, but the judge refused to hear him.

“He told the police to report to remove me from the court,” Wyllie said.

Regarding resolution of the matter, Wyllie said:

“That’s the whole point. You see, it is  about human rights in this place.”

Meanwhile, Assistant Director of Public Prosecution, Karim Nelson, who, along with Crown Kaylia Toney appeared for the Crown in the matter, told iWitness News that he agreed with the judge’s decision.

In a WhatsApp statement to iWitness News after Friday’s hearing, Wyllie said:

I just want to re-emphasise my position on what happened in court today. Those two incidents that he spoke of me not apologising, I apologised after I returned to court. The court recording would verify that. I did ask my colleague Vynnette [Frederick] to go to court and stand in for me when I was ill and couldn’t return in the afternoon. However, she was engaged in other matters and couldn’t attend.

Again, I apologised when l returned to court the following day. Therefore, there is no reason to apologise to him […]”

6 replies on “Judge orders police to remove lawyer from courtroom  ”