Nearly half of SVG’s dialysis patients have died since 2018 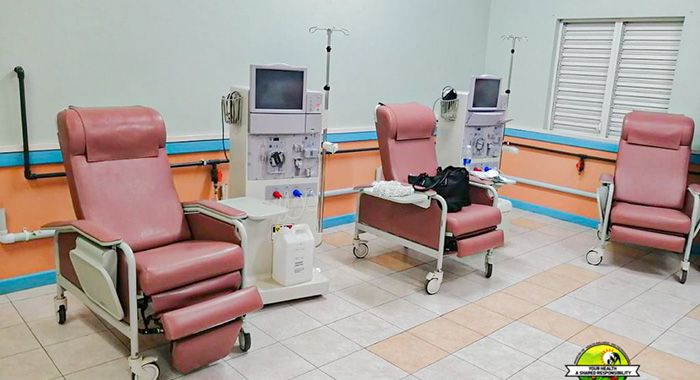 Dialysis stations at the Modern Medical and Diagnostic Centre in Georgetown in April 2021. (Photo: SVG Health/Facebook)

Nearly half of the people who have been receiving dialysis at the Modern Medical and Diagnostic Centre in Georgetown since 2018 have died.

“Three or four” of them have recovered and no longer need to receive dialysis, Minister of Health, Jimmy Prince told Parliament last week.

He was responding to a question from West Kingstown, Daniel Cummings, who noted the recent announcement by the government that people can access dialysis treatment for free at the health facility in Georgetown.

Cummings asked the minister to say the total number of patients who have received this treatment at the government facility to date; how often they receive the treatment; and how many of these patients have since died.

Prince said 176 patients — 88 females and 88 males — had been dialysed since the facility became operational in 2018.

He said patients receive dialysis two or three times per week but a patient may require more frequent sessions, depending on their health condition.

“Notably, at the initial phase of treatment, a patient will have dialysis done daily for the first two days. This is done for a shorter period of two hours,” Prince said.

He said 80 patients have since died, adding that some patients have migrated, others have switched to the private company and “three or four” patients have recovered and no longer need the treatment.

Prince said that most patients who have died had other comorbidities such as lupus, cancer, and non-communicable diseases.