Homeless males charged with theft of $68,000 of items from store 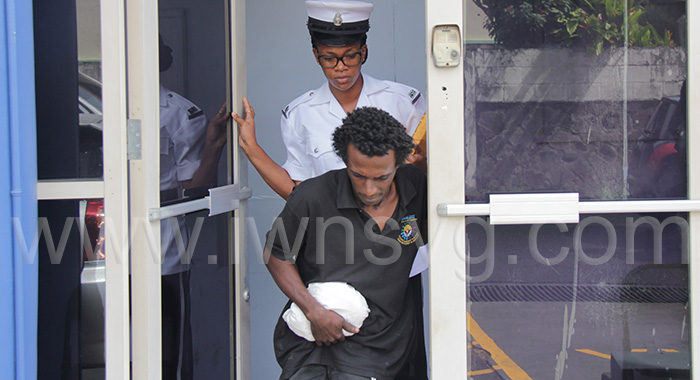 Kamal Small, one of the defendants, leaves the Kingstown Magistrate’s Court on Thursday, Dec. 29, 2022.

Two males, including a 16-year-old, both of whom are sleeping rough in Kingstown, were remanded in custody in connection with the alleged theft of items valued at EC$68,150 from a store in the city.

Kamal Small aka Condom and the teen appeared before Senior Magistrate Rickie Burnett, on Thursday, charged that on Dec. 26 — Boxing Day — at Grenville Street, Kingstown, they entered the Platinum Divas Store as trespassers and stole 300 stainless steel Skemei wrist watches, valued at EC$67,500, one blow hair dryer, valued at EC$150 and a quantity of female accessories, valued at EC$500, total value, EC$68,150, the property of Mohammad Afaneh, of Cane Garden.

Both accused pleaded not guilty to the charge.

The teen was charged separately that on Dec. 26, at Grenville Street, without lawful excuse, he damaged one 38”x33” glass window, valued at EC$1,000, the property of Mohammad Afaneh, of Cane Garden, intending to damage such property.

Police Sergeant Atnel Ash did not object to bail for the men but asked for sufficient surety. He asked the court to note the value of the items stolen and to also impose reporting conditions.

“I know each case has to be treated separately. There was a case recently where a defendant was charged for $150,000 in damage to property. He was in prison for a while, could not get a surety and was granted bail in his own recognisance.”

The magistrate asked Rose-Ann Richardson, a Crown counsel who was at the Bar table, to comment on this.

Richardson told the court that she was thinking that perhaps that case turned on its own facts.

“Those were peculiar circumstances,” Richardson said, adding, “Bail is not to penalise the defendant but there is still the need to ensure the persons appear for their matter and if not, there is some tangible offer if they are not before the hands of justice.”

The Crown counsel said she did not think that Ash’s suggestion was unreasonable.

“In fact, two sureties can assist in having them access bail,” she said.

Burnett said he was going to grant bail on the conditions requested by the prosecution, but added that he would follow the matter as the defendants might be in prison on remand for a while and might approach the High Court for bail.

The teen told the court that he does not have a surety. “I live on the street,” he said.

“I know you are living on the streets because I see you from time to time,” the magistrate said.

The teen then told the court that he uses cocaine and ran away from the Mental Health Centre recently.

On further inquiries, the court learnt that the police had taken the teen to the psychiatric hospital because he was behaving strangely.

His behaviour was attributed to his cocaine use rather than any unrelated mental health issue.

The court and the prosecution were of the view that in light of the circumstances, there was no need to send the teen for a psychiatric evaluation.

Richardson then told the court that based on the teen’s background, it was highly unlikely that he would be able to access bail.

She suggested that he be remanded and “a short turn over time” be set for his trial or that he be granted bail in his own recognisance, with strict conditions.

Meanwhile, Small, who was hopping, told the court that police had shot him in the leg.

He said he lives in an “old building” near Victoria Park, Kingstown.

Richardson impressed upon the court that there be a short turnover time for trial.

She said a few more things need to be done before the prosecution is ready to proceed to trial.

“But I don’t think that with the urgency that it cannot be completed,” she said and suggested that a trail be set for the second week of January.

“What conditions do I impose on these two special defendants?” Burnett said.

Richardson suggested that they be remanded, adding that there had been “some assistance and we want to continue that cooperation”.

She was apparently referring to information that one of the accused had given to police, which led to the recovery of some of the items and a third person being taken into custody.

She also said that the prosecution would have to make checks with the Mental Health Centre.

“I think the best course of action would be to remand them until the trial,” Richardson said.

The magistrate remanded the accused into custody until Jan. 16, 2023 for trial.

“In the event that the prosecution is not ready for trial, the court would review bail on application,” Burnett said.

2 replies on “Homeless males charged with theft of $68,000 of items from store”