Insights from a blind journalist in Angola 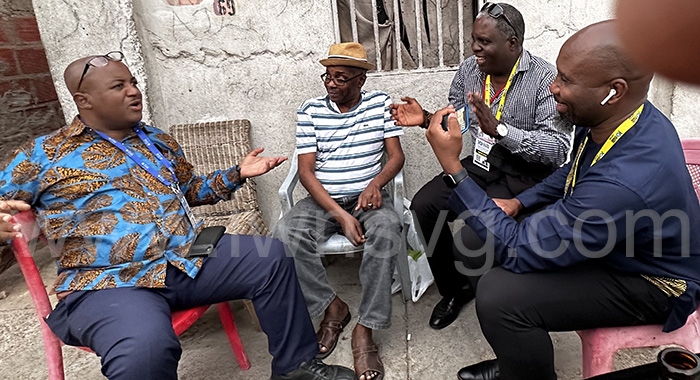 LUANDA, Angola — “Did you tell him I am blind?” Salas Neto said in Portuguese, his words translated into English by Sousa Jamba, one of his protégés, who has transitioned to strategic communications and works in that field for the Brussels-based Organisation of African, Caribbean and Pacific States (OACPS).

It would have been difficult to tell, had I not been told beforehand, that this 63-year-old bespectacled journalist, wearing a straw hat, t-shirt and jeans, who stood up from his roadside seat and extended his hand in greeting as we arrived, was completely blind.

It was Dec. 10, 2022 and we had driven through a rough area (on an unpaved road littered with garbage and people milling about) of this southern African city to Neto’s roadside haunt in Nelito Soares District in the municipality of Luanda.

For a while, Salas’ attention was divided between entertaining his guests and the commentary of the FIFA World Cup football match between Portugal — Angola’s former colonisers — and Morocco, an African nation.

He followed the match, with his cell phone to his ear.

Then the cheers went up, and Jamba sought clarification about the outcome.

While Jamba spoke in Portuguese, my Spanish allowed me to follow the conversation, as he confirmed that Morocco had indeed defeated Portugal.

Then, he switched to his third language, saying, celebratorily, in French, “I am Moroccan!”

I have come to Angola – the fourth African country I have visited — to report on the 10th summit of Heads of State and Government of the OACPS.

And with the summit having ended, Jamba, as well as Herculano Coroado — another Angolan journalist, who also assisted in translating the conversation — took me along to visit Neto.

In the four days since we met, Jamba and Coroado had reminisced about how supportive journalists of their generation were of each other, fighting against government suppression and supporting imprisoned colleagues and their families.

They had also boasted about how Neto had moulded them into the journalists and communicators that they have become.

Neto told me about how he began his journalism career in 1985 (I was but 4 years old then) at the sports desk of Angola Press Agency (ANGOP) and worked his way up to sub-editor.

However, because he was “a rolling stone”, Neto went to Brazil to study advertising, where he ended up working for five years for an opposition newspaper.

Neto’s career would take him back to Angola, where glaucoma claimed his sight progressively over seven years ending in 2015.

But, losing his physical sight has not robbed Neto of his vision. He has since learnt Braille, which allows him to surf the internet. “I have my page on Facebook which is a kind of newspaper because I put my column, which is very, very popular and very funny, there. I also have a column in an official Angolan newspaper,” he said.

Angola has deep-rooted connections to the Americas. History records it as the place from which the first slaves arrived in Virginia 400 years ago, beginning a trade in Africans that lasted two centuries. Today, Angola has the third largest economy in sub-Saharan Africa, largely driven by its oil exports.

A civil war that broke out immediately after independence in 1975 and lasted until 2002 and which exacerbated the underdevelopment that accompanied European colonial exploitation, as well as income and wealth distribution issues in the post-independence period, have contributed to the socio-economic and socio-political realities in Angola.

Neto lived through the civil war and would steal books after the clashes. “We were kids. I was 15 years old. I only went to steal books and I was almost killed. “

I asked Neto about his outlook on Angola.  “It’s dark,” he said.  “Why?” I asked in bewilderment. “It is such a rich country.”

“Because it is rich. Very rich among thieves,” Neto responded. “It has wealth in terms of thieves too. We black people are not ready to govern. Just look at Haiti. I hear of things in Haiti. It seems that the gangs have more power than the government. This makes me sad. A number of African states have the same problems. We made the whites rich; they come here, they exploit us and then we go behind them with extended hands asking for handouts.”

Neto has a 36-year-old daughter and six grandchildren. He said that his ideal would be “to have a Norway for them to grow up in.

I have been reading a lot about Norway because I am about to write a column. He noted that Norway gives one year’s maternity leave.

“I told my daughter, ‘You and your daughter, can you start a political uprising here so we can get expelled and can go somewhere and ask for political asylum?’ But she refuses to do that.”

Neto, however, did not give a clear answer on whether he would have started such an uprising himself if he were not blind.

Earlier in the week, at one of our conference venues, we had asked members of the staff who appeared to be in their 20s whether they would leave Angola if given the opportunity to.

All of them said yes. Their outlook for the country was grim and they wanted to pursue their options in Europe, North America, or another African country. However, Neto said he was planning to write, the following week, about why he has not left Angola.

“Four reasons,” he said, adding that the first is that among his friends, only three had left Angola for good.

“We never had this desire to migrate,” he said.

Further, Neto has never been conscripted, having been exempted from military service because of his vision problems.

Returning to his humorous tone, he said, “As I was very used to being lazy as a journalist, I was scared of the hard work I would have to do if I left the country.”

Neto’s fourth reason was that he could not leave Angola for a long period of time. “I like going abroad for short periods but I can’t leave for long. As a sports journalist, I know Africa, Europe, America, Brazil. The problem was not getting there. But for my grandchildren, I would have made this sacrifice — asked for exile on humanitarian grounds.”

I noted to him that it is said that the pen is mightier than the sword, adding that from all indications, his is a very powerful pen.

“The problem is that I write in Portuguese,” Neto retorted. “I write books but nobody even reads them.  The president even told me that if I wrote in English, I would have had a mansion in Miami surrounded by beautiful Venezuelan maids,” he said and laughed.

Neto was happy that the people he helped to train still visited him now that his vision prevented him from travelling on his own. “I was very influential. I was an authority in the media. They lads probably write better than I do,” Neto said and mentioned the names of leading figures in journalism in Angola whose work he edited.

“Everyone pays their respects,” he said, but added that he had never won any major prize for his work in the media.

But he boasted that there are only two intelligent black men in Angola: one is him, of course, and the other, the late Jonas Savimbi — an Angolan politician who founded and led the National Union for the Total Independence of Angola (UNITA), which fought against Portuguese colonial rule

Neto said: “This visit from you guys has made me very happy. And also, with Morocco’s victory in football, I almost had an orgasm. That’s when you guys came in. I was so pleased. You know Morocco is an African country!”

He said that because he knew I was visiting, he put on his straw hat, adding that with more advance notice, he would have cooked me a special meal of dried meat and pounded pumpkin seeds.

As the conversation progressed, I noted that most of the roads in the areas are dusty and unpaved, but that it appeared that some of the roads were recently paved.

“When it rains it is a problem, you can’t cross. They should have done this sooner,” Neto explained.

He correctly predicted that France and Argentina would make it to the World Cup finals, adding that it would be good for the African continent if Morocco made it to the finals.

“I will not accept that loss for Africa. Senegal was treated badly. I follow the game ball-by-ball and the analysis,” Neto said.  “We Africans, especially we blacks, we give in too easily. Look at the Arabs; the Moroccans!”

As I was about to part with Neto, I noted to him that Africa, like everywhere else, has its problems, but there is a tendency among some media practitioners to portray Africa as a land of problems, if not a problem in and of itself.

Neto would write about our interaction — titling his piece “MY ROAD TO FAME IN THE CARIBBEAN!” — resulting in me being invited to a radio show the following day along with Jamba, where I echoed the same view.

Then, there were a number of inquiries about why Jamba had not taken me to this or that media entity first and another invitation for me to appear on a television show on the Monday night that I was scheduled to depart Angola, which I had to decline.

And, as we left Neto for my hotel, Coroado observed and declared to me that it was unusual to see a journalist who still went around interviewing people and hearing their stories.

I couldn’t help but reflect that when I joined the media 20 years ago, the late Charles Harding, a noted Barbadian media trainer, emphasised the importance of the interview and the mastery of it. Today, many media operatives in my home country, St. Vincent and the Grenadines, sit behind desks and copy and paste stories in their entirety, or make a shameless attempt at repurposing other people’s work.

But, for whatever it is worth, it seems that interviewing people would be my legacy in journalism, as just one night earlier, at home in St. Vincent, a school had put on a play entitled “Nine Mornings with Kenton Chance”.

The setting was a Nine Mornings activity and as the play opened, one of the characters identified himself as “Kenton Chance” and proceeded to interview the other characters about what they were expecting from the festival.