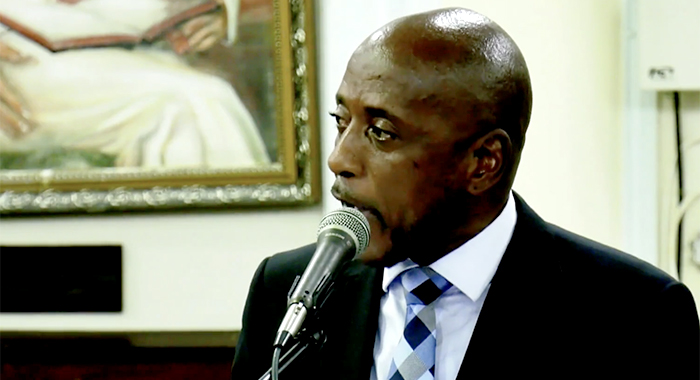 Former national goalkeeper, Fitz Bramble, is urging the government to rally behind the football fraternity to improve St. Vincent and the Grenadines’ (SVG) chances of making it to the 2026 Football World Cup.

The East Kingstown MP pointed out to Parliament that 16 more teams will qualify for the finals and more places will be available in CONCACAF, the league in which SVG play.

The opposition lawmaker told the Budget Debate that a member of his party’s youth arm (Young Democrats) in East Kingstown has suggested a mantra for SVG’s campaign.

“And I am challenging the government to lead that charge. I am making myself available, I’m quite sure my honourable colleague from Central Kingston who has done outstanding work for the development of football in this country, would also make himself available.”

Bramble noted that with the World Cup slated to be held in CONCACAF and with 16 more places in the finals, SVG has a greater chance of qualifying.

He, however, suggested a “revolution”, adding that the World Cup is arguably the ‘largest single sporting event on the planet’.

“In 2026, the number of teams qualifying for the World Cup finals will increase from 32 to 48. So, St. Vincent and the Grenadines has a better chance because more teams will be given the opportunity. In addition to that, World Cup 2026 is going to be hosted in CONCACAF, our region, by three countries — Canada, the USA and Mexico.”

Bramble noted that the host countries automatically qualify for the World Cup Finals.

He said this means that in CONCACAF, the region in which SVG play, “we have three free spots because Mexico, Canada and the USA already qualified and we are going to have, I think, an additional two or three more spots because of the increase in the number of teams.

“So conceivably, we have about six spots up for grabs to make it to the World Cup finals.”

He said that in the region, Costa Rica, Panama, Jamaica, and “maybe” Trinidad traditionally pose a challenge to SVG’s qualification.

“When I played for St. Vincent and the Grenadines in the mid 1990s to 2000s, St. Vincent experienced its highest ranking of 73rd in the world. I remember in 1992, I had just returned from university. The first time ever we played in World Cup qualifying games, and we played against Mexico and that was the first time ever,” Bramble said.

He said a World Cup support committee was established in SVG.

“We were on TV commercials. I mean, we really got excellent support, not only from the St. Vincent and the Grenadines Football Federation, but from the NDP government which was a sports and a youth government,” said Bramble, a member of the opposition New Democratic Party (NDP).

“First time ever St. Vincent played in front of millions of people in the world on TV in Mexico and Azteca Stadium in Costa Rica. We can return to those levels and I am suggesting here that for 2026, we launch a sports revolution led by football and St Vincent’s bid to make it to the World Cup 2026.”

Bramble was referring to St. Clair Leacock, an opposition lawmaker and  former president of the SVG Football Federation.

“Let’s put the ideas and the thoughts together. Because just imagine St. Vincent and the Grenadines playing in the World Cup finals. I mean, just imagine. Just imagine.”