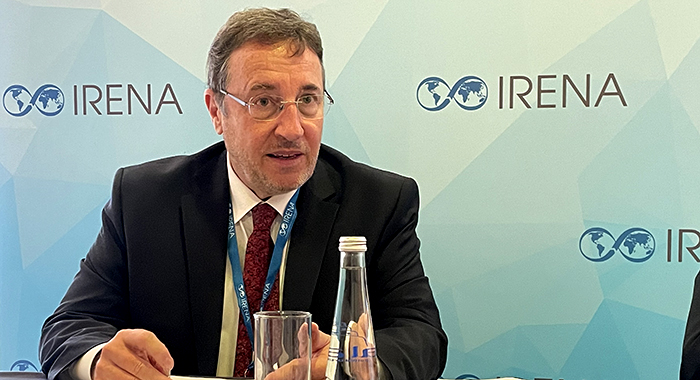 ABU DHABI, United Arab Emirates (CMC) — The head of the United Nations Development Programme (UNDP), Achim Steiner, says the shift to renewable energy should not result in developing countries, such as those in the Caribbean, becoming even more indebted to the rich nations that created the climate crisis in the first instance.

“If you want to achieve a world in which 1.5 degrees remains even remotely a possibility, we have to stop living in denial and assuming that some of the poorest countries that are already indebted and are facing a fiscal crisis after COVID-19, should now borrow even more money from the rich world in order to finance and accelerate the transition towards clean energy,” Steiner told journalists covering the 13th IRENA Assembly that ends here later on Sunday.

He spoke as the world prepares for the global stocktake, measuring the progress made since the climate change deal was reached in Paris in 2015.

Caribbean countries and other small island developing states have been trying to convince the international community that containing global temperature rise to below 1.5 degrees Celsius, above pre-industrial level is necessary to prevent worsening of already catastrophic impacts of climate change.

“Let us be clear, the world is nowhere near where it needs to be,” Steiner said, adding that many countries have advanced extraordinarily fast, proving that it is possible to provide 90 per cent of electricity on the national generation infrastructure from renewable sources.

“There is an irony in this expectation that I think needs to be challenged and not in the sense that we are just talking about transferring money from north to south.”

Steiner said the world needs to stop looking at the challenge of access to clean energy “as simply a lending operation where the poorest countries that have the greatest need to create access to electricity have to become borrowers”.

He urged that the issue be looked at from “a co-investment perspective”, adding that much of the UNDP’s current work is focusing on how to help countries to “de-risk their investment environment”, while working with the international financial system meaning — public and investors– to actually mobilise investments rather than just loans.

Steiner said that otherwise, “the poorest people will have to use their tax revenues to repay the richest people in the world for compensating for something that they have had very little role in causing, but are now actually at the frontier of the impact”.

He said that rich and poor countries are partners in the transition to renewable energy.

“We are not competitors in this transition, and much of what the United Nations brings to this debate is hopefully the ability to unify governments, investors, companies and technology providers, ultimately enabling us to still have a remote chance of staying within a 1.5 degree world,” he said.

The UNDP administrator said that the reality is that currently, there are 700 million people without access to electricity.

“And this is why we committed as UNDP to support 500 million people to gain access to clean and affordable energy in the coming four years,” Steiner said.

But he told reporters that the challenge for many developing countries “is not to tackle climate change as a  free-standing problem, but rather to look at how their economy, how their society, how their financial system, their energy systems can best anticipate a world in which decarbonisation is unequivocally going to be the reality…”

He said this is “not magic” as there are countries that currently generate 70 to 90% of their national electricity needs with renewables.

“It’s the product of something far more systematic, beginning with national leadership,” he said, adding that leadership from government, business and society is the one factor that explains why some countries have advanced quickly and others have been slower.

Steiner said the world should not allow “the narrative of concessional borrowing to mask the fact that the richer world will need to invest in the poorer world being able to pivot into a clean energy matrix, not only because of decarbonisation, but precisely because of development”.

He said that if poor people remain locked in an economy without access to electricity, “do not be surprised if at some point, the lights shining over the other side of the Atlantic, the Mediterranean, the Indian Ocean, are so bright when you sit in the dark of the night, that you will say as a young person, ‘I have no hope here. I have to go somewhere else.’”

The UNDP official said this was not “a sort of migratory paranoia. It’s simply a fact of human history.”

He said the world is seeing “a serial failure” in the international financial policy responses to the COVID-19 pandemic, to the cost of living crisis, and the debt problem.

“UNDP warned already with a report last year, that more than 54 countries were facing a debt distress reality. The G20 has been paralysed and has been unable to act. The international financial institutions have been struggling to put up a response that is commensurate with the potential global recession but certainly with a debt problem.”

He said public finance needs to be mobilised, “but what we actually see is countries, certain countries cutting their ODA (official development assistance), reducing their international financing — completely the wrong response.

He said it was also necessary to bring the international community to more explicitly address the financial markets.

“It cannot be that we live in a world where essentially a significant part of the international financial economy continues to invest in yesterday’s economy, for which taxpayers have to essentially compensate with the consequences — floods, extreme weather events and all of these things that basically, then, the public taxpayer has to compensate for,” Steiner told reporters.