Board should explain reason for NIS distress — Friday 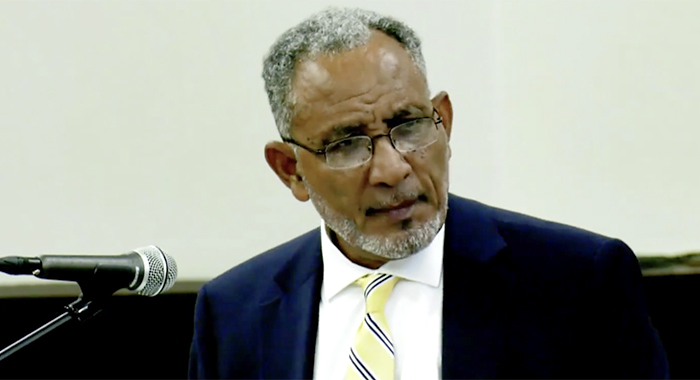 Opposition Leader Godwin Friday says that the board of directors of the National Insurance Services (NIS) should be made to explain how the social security agency ended up in a situation where it had to dip into its reserves last year.

He noted in the Budget Debate that social security agencies are expected to have in reserve money to meet its expenses for at least 10 years.

However, last year, the NIS asset base fell by EC$24 million to EC$476 million and about EC$6.2 million was drawn down from its reserves to support the recurrent and social security expenses, Minister of Finance Camillo Gonsalves said in his Budget Address.

But the opposition said that questions should be asked about the status of the NIS.

“The questions you have to ask yourself is, ‘How did the NIS get to this point where such draconian measures may be part of the conversation? How? What is the state of the NIS reserves?” he said, noting Gonsalves’ announcement about the NIS having dip into its reserves.

“I’m told that this is something that you don’t want to do,” Friday said, adding that the reserve is intended to compensate in instances of shortfall. “The ideal situation is that contributions by workers and employers and investment income would sustain the NIS.”

“And then, of course, the administration costs have to be kept in check to make sure that it doesn’t exceed what is considered to be reasonable in the circumstances, and sustainable by the institution,” Friday told Parliament.

“So what is the state of the reserves at the NIS? Prudentially, 10 to 15 years of reserves, that is to say, 10 times what it would take to maintain the program for a year that you’d have that going forward as reserves for institutions or 12 times, 15 times and that is considered to be a prudent yardstick to use,” he said.

“And if you have 12 years of reserve, then the possibility is there that you might be able to pay some incremental increase to policyholders. Otherwise if you’re not, if you are having to dip into reserves…”

He said that in answering the question “How did we get there?” it is necessary to examine the NIS’ investment portfolio.

The opposition leader said the Estimates of Income and Expenditure for 2023, which Parliament approved in December, contained several loans to government with interest rates of 3.5 or 4% .

“Is that the sort of return that the board and management should be expecting when they lend? If you had to borrow from a financial institution here, you’re looking at 8% minimum — 8.5%; depending on the type of activity you’re in, 12,” Friday said.

He told Parliament  adding that while the NIS has a social responsibility component to its mandate, “that can’t simply be done to the point where it undermines the integrity of the system.

“So that is something that you have to maintain, make sure that that balance is there. Where are we now and how did we get here? That’s the question that the board will have to answer,” Friday said.

The government has said that the NIS will hold consultations with stakeholders about the reform option.

“Well, these are some of the questions policyholders need to ask, ‘How did we get there?’ ‘What are the types of investments we’ve made?’ ‘Why were they made?’ ‘Where were they the NIS, for example, when the government did not pay over its contributions to the NIS and owed the NIS, I think, $22 million dollars or thereabout that instead of paying them cash, they swapped the Ju-C building for debt?’

“‘Why is it that the debt that was held by National Properties, land was transferred to National Properties, which was then swapped for the [debt to the] NIS …, instead of paying back the cash, which they (NIS) could then invest for their own purpose, and a better return, possibly, or at least they can determine how that is?’

“‘How do these arrangements affect the liquidity and the earning potential of the NIS and, ultimately, its reserves? Because that is what is going to affect the quality of service that it provides to the people of this country.”

The opposition leader noted that the government has outlined a number of options for pension reform.

“One was to introduce mandatory coverage for self-employed workers. So you’re spreading the pool broader,” he said.

Friday told Parliament that one consideration regarding this option is how the mandatory contribution by self-employed workers would be collected.

“I mean, a lot of self-employed people I know want to have coverage but they just haven’t taken the effort to do it. And the NIS itself has not taken its show on the road to try to enrol people,” he said.

“The point of the matter is, this is a service, that everybody who is involved in it would know that this is beneficial. People know what’s in their best interest … So you have to find a better way to communicate to people to see that this is in their own self interest, and then they should be coming to your door to say, ‘Sign me up.'”

Friday said that the NIS needs to be more proactive.

He served further comment on the matter, “because it is one of critical importance.

“It is one that people need and are quite justifiably right in taking an interest in to ensure that their retirement income, their security in old age, their only source of income is protected going forward and it doesn’t put it out of reach for people where the retirement age goes up to 70 and your contribution rates to 15% and so forth and … doesn’t provide much benefit in that regard.”

The opposition leader expressed hope that the consultations will be fruitful.

“And I hope that the sound footing that NIS has been on will continue. But obviously, changes have to be made. And that is something that has been brought about by current circumstances that need to be properly explained,” Friday told Parliament.

“You can’t just tell people that this is what’s going to happen. Because we said this or because the actuary said that. The actuary takes the facts as they are.”

Friday said that opposition lawmakers do not have access to the actuarial report, even as their constituents are asking questions about the situation.

“They come and ask me and they complain. ‘Friday, how alyo quiet on this?’ I say, ‘tell me the information. I don’t have the report just like you. I’m just hearing this stuff that I hear from the minister or from the executive director, and we need to be better informed on it.’

“And the obligation comes in to make sure that we are because we are parliamentarians; we are dealing with matters. That matter is going to come back here,” he said, referring to the parliamentary approval necessary for changes to the NIS.