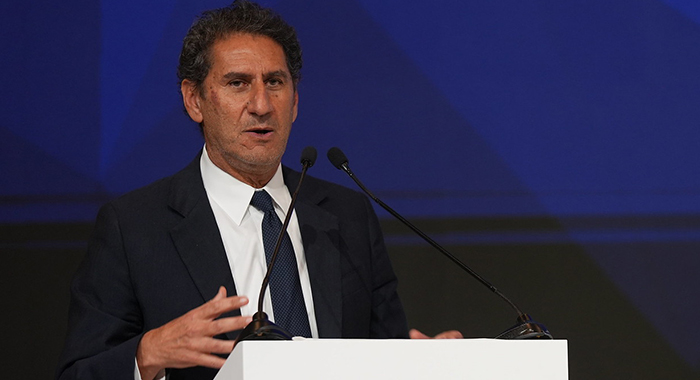 “Naturally in the short term, it may have assisted with the disruption of the supply chain, also slowing down the transition,” he told reporters at the 13th IRENA Assembly, which ended here on Sunday.

“To become more independent means having more actors in the market. So, it means going to a decentralised and new system,” La Camera said, adding, “and this is only possible if we go to renewables naturally with a complementary storage with the updating and renewal of the grids.

“But, inevitably in the medium long term, this crisis is the last lesson that countries are receiving, to become more independent and work for a system that is more decentralised.”

Caribbean countries, like the rest of the world, have seen the cost of energy skyrocket amidst a global spike in the price of oil, which many of the region’s countries depend on for electricity generation. The higher oil prices have also resulted in an increase in the price of basic food items.

The region faces these realities as the international community prepares for the 2023 UN Climate Summit (COP28) to be held here in December, when countries will take stock of the progress made since the signing of the historic climate accord in Paris in 2015.

Speaking at the ORENA Assembly, Grenadian Simon Simon Stiell, who is the executive secretary of the United Nations Framework Convention on Climate Change (UNFCCC) said this year’s talk will be “a moment of truth”.

He said the critical questions should be, “Are we measuring up?” and “Are we ratcheting up?”.

“It will be an exercise in ambition and accountability, and about accelerating action and making sure that all parties and all stakeholders are holding their end of the bargain,” Stiell said.

Stiell said that the review will enable the international community “to look at every sector, every region to give political and technical direction and this is far more, far, far more than just another input into our NDCs (nationally determined contributions)”.

Meanwhile, UN Secretary-General António Guterres told the Assembly that the world is still addicted to fossil fuels even as the 1.5 degree goal is “fast slipping out of reach”.

Small island developing states (SIDS), citing data from the Intergovernmental Panel on Climate Change (IPCC), have convinced the global community to agree to keeping global temperature rise to 1.5 degrees Celsius above pre-industrialisation levels, in order to avoid the worst impact of climate change.

“And the current policies, we are headed for 2.8 degrees of global warming by the end of the century, the consequences would be devastating,” Guterres said.

“Several parts of our planet would be uninhabitable. And for many, this will be a death sentence,” the UN chief further stated, adding that renewables are the only credible paths forward, if the world is to avert climate catastrophe.

He said the share of global electricity generated by renewables must be doubled to 60% by 2030 and increased to 90 per cent by 2050.

He put forward a five-point energy plan for the just transition to renewable energy.

“Second, we must diversify and increase access to supply chains for raw materials and components for renewable technologies, without degrading our environment,” Guterres said, noting that this can help millions of green jobs, especially for women and youth in the developing world.

He said decision makers must “cut the red tape” and fast track approvals for sustainable projects worldwide, and modernise grids.

“Fourth, energy subsidies must shift from fossil fuels to clean and affordable energy. And we must support vulnerable groups affected by this transition,” he said.

The fifth point was that public and private investments in renewable energy should triple to at least four trillion US dollars a year.

“Today, most investments in renewables are in the developed world. The price of renewable technologies can be seven times higher in developing countries. We must all work together to reduce the capital costs for renewables and ensure that financial flows to those who need it most,” the UN chief said.

“Developed countries must work with credit agencies to scale up green investments in developing countries,” Guterres said and urged ministers of energy and others to promote “ambitious national policies and greater social and economic equity, including by taxing the windfall profits of those exploiting today’s energy crisis”.

Meanwhile, Csaba Kőrösi, President of the 77th United Nations General Assembly, told the IRENA assembly that climate change is “one of the most pressing issues of our time.

“And it is a challenge that has affected and will affect all of us and all of those who come after us.”

The Hungarian diplomat said energy and climate change are intrinsically linked, with science saying fossil fuels account for 75 per cent of global greenhouse gas emissions and 90 per cent of all carbon dioxide emissions.

“So, success in climate protection depends on transition to carbon-free energy use,” Kőrösi said, noting however, that the energy transition that the world had foreseen was a peacetime agenda.

“How will it work in times of major political confrontations, when energy supplies are turned into a tool of conflict?” he said, adding that in the short term, addressing emergencies, there might be setbacks in the transition, and the greenhouse gas emissions will probably rise.

“But if you look at the investment trends, the long term impact of the conflict might be the opposite,” Kőrösi said, adding “from solar to wind, wave and geothermal, renewable energy sources are available for every climate. Their use has the potential of strengthening energy sovereignty.”

He said that the world can choose to truly reduce its dependence on fossil fuels — imported or locally produced.

“We can choose to transition to more sources of energy that will not upset the sensitive balance of our planet. We can choose to ensure that the transition to renewable energy is equitable. If we are to attempt to reach the goals set out in the Paris Agreement, member states must act without delay,” he said.

He said that in order to speed up the transition and make renewable energy a global public good, the world must share knowledge and transfer technologies.

“We should work to make the intellectual property rights regime an enabler of energy transition and innovation, not a barrier to it.”

He also called for bolstering partnerships with stakeholders, from academics to civilians through corporations who have good track records in sustainable energy initiatives.

“How else will we ever achieve SDG7 or reach net zero emissions by 2050?” Kőrösi said.

“Dear friends, we are in a desperate race against time. We need bold, transformative action to curtail climate change. We have the knowledge, we have the means we should only have the will,” Kőrösi told the assembly.