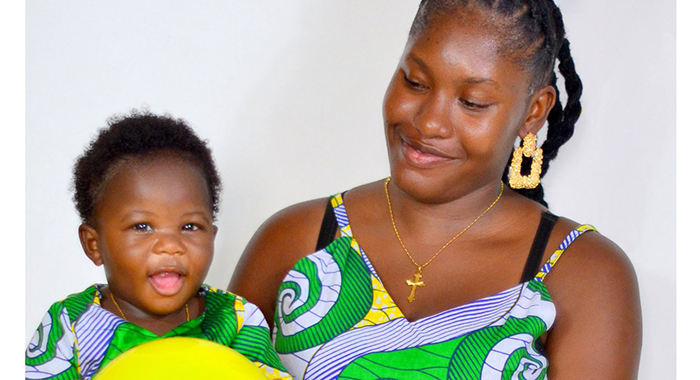 The mother of 3-year-old Rayden Davis, who died on Wednesday after three months at Milton Cato Memorial Hospital (MCMH), is questioning the statement by the Ministry of Health and Office of the Prime Minister that he was born with a compromised immune system.

The government has come in for much criticism over its handling of Rayden’s case, with his mother, Nadine Davis, saying that the authorities failed to do enough to send Rayden overseas for medical attention when he could have been saved.

“They said the child [was] born with an immune disease. When the Ministry of Health sent out that press release, that is when I know,” Davis told iWitness News on Sunday.

“If he was born with it, why did he take so long to get sick? In two and a half years, he was hardly ever sick, [was] hardly getting a cold,” the mother said.

“I am mad,” said Davis, who told iWitness News that she has been either angry or sad since her son’s death.

She further rebutted the government’s claim that the World Pediatric Project (WPP) was handling her son’s case.The mother said that WPP got involved because MCMH sought their help in performing a kidney and liver biopsy on Rayden.

“But Rayden’s platelet was too low,” said Davis, who told iWitness News that she was with her son “every day” of his hospitalisation, as his father was in Canada during the early stages.

Davis said she believed that her son’s case would have been handled differently if she was granted an audience with Prime Minister Ralph Gonsalves.

She said she had attempted to see him but a member of his staff told her that the prime minister would not be able to help unless a hospital overseas had accepted Rayden as a patient.

She had a message for government ministers for instances when constituents approach them for help.

“Let the secretary or whoever is there, give them a chance and let them listen. Because at the end of the day, sometimes, we come and don’t have the chance and they wouldn’t hear about it after because the secretary would not mention it to them to say this person came for a little help from you or whatever,” Davis said.

“Even if it is five minutes, see them, hear what they want help about. Because, at the end of the day, everything will come down to them. They are the ones who have to make the bigger decisions,” she told iWitness News.

She urged the government to get the requisite equipment necessary for diagnoses.

“When they sent out a test, make sure they expedite to come back quick. Because all of those things, all of those hold-ups, that does be the hardest thing to wait for a result so long and it come back and you don’t know what it (the diagnosis) is and you have to wait so long again. Try provide the equipment here to do the testing yourself; people who would do that,” she said.

In a joint press statement on Friday, the MOH and PM’s Office said that Rayden was first presented to the medical team at MCMH in June 2022.

“Sadly, he was discovered to have been born with a weak immune system (congenital immunodeficiency).  This condition was further complicated by other disorders which remained not fully diagnosed up to the time of his passing on 18th January, 2023.”

The statement said the health care team of MCMH, inclusive of the Paediatric Department, Haematology Department and Psychosocial Department, “provided the indicated medical care to Rayden throughout the entire period of his hospitalisation.

“This care was determined by a continuous, consultative process which drew on the expertise of specialist paediatricians in this country, Trinidad and Tobago, the Hospital for Sick Kids in Toronto, Canada, and our World Pediatric Project (WPP) partners.”

The government further said that in an attempt to have Rayden transferred to a hospital overseas, MCMH personnel requested support from the Office of the Prime Minister.

“Immediately, authorisation was given for payment for a private charter to facilitate air transfer to Trinidad and Tobago. This was actively pursued: contact was made with an airline, and arrangements were made for a doctor to accompany and provide support to Rayden during the flight and, also, for other forms of support to his mother for her stay in Trinidad and Tobago.  However, these plans were placed on hold at the request of the Trinidadian medical authorities who had initially agreed to accept Rayden as a patient.”

The statement said that efforts continued to secure confirmation from overseas medical specialists of their willingness to accept Rayden as a patient in order to facilitate his transfer to a medical facility outside St. Vincent and the Grenadines.

“These included formal requests, in writing, from the Office of the Chief Medical Officer to several regional health systems. Unfortunately, this confirmation was not forthcoming and, up to the time of his passing, no overseas medical team had committed to accepting Rayden as a patient.

“Extensive tests utilising the services of local and overseas laboratories, and a full series of consultations between MCMH medical personnel and specialist paediatricians in the Caribbean and North America did not yield a definitive diagnosis.  This uncertainty impeded overseas referral and care,” the government said.

It said the following procedures are followed in cases where patients require overseas medical care:

· Contact is made with the regional or international health system/ facility, and the requisite medical reports are forwarded for preliminary assessment.  This contact may be initiated by the patient’s family or by local medical personnel, the latter at the request or with the permission of the individual’s next-of-kin.

· The receiving doctor and institution will then indicate whether or not they are able to accept the patient for further evaluation and/or treatment.  This is usually communicated in writing to the local medical team and the family.

· Once such communication is received, arrangements are put in place for the transfer of the patient, based on the advice of medical personnel.  This will be done with the consent of the next-of-kin and the requisite support from the health care team.

· Financial support may be provided by the State, if required.

“The Ministry of Health, Wellness and the Environment is fully committed to the continuous improvement of the range of quality healthcare services available to the public, inclusive of the strengthening of our collaborative partnerships with regional and international healthcare systems.

“We express sincere condolences to Rayden’s parents and all his loved ones.  The MCMH team, and other ministries and departments of the public service will continue to support Rayden’s mother, cognisant of how difficult it is for a parent when her child has suffered gravely for a prolonged period. Our thoughts and prayers are with the family during this difficult period.”