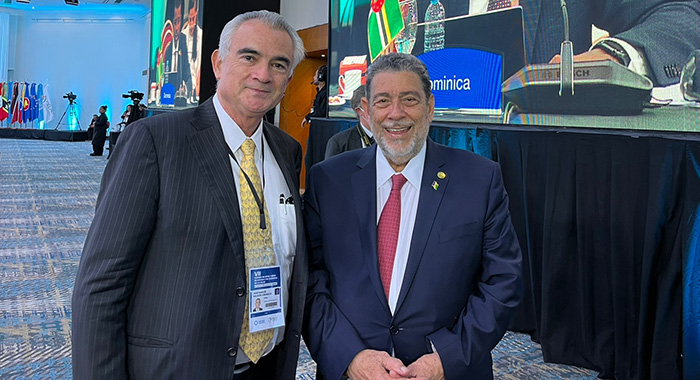 Prime Minister Ralph Gonsalves has led St. Vincent and the Grenadines in a successful  bid to hold the presidency of the Community of Latin American and Caribbean States (CELAC), for 2023, becoming the first CARICOM nation to do so since CELAC was founded in 2011.

SVG assumed the presidency during the seventh summit of the 33-member hemispheric bloc in Argentina today (Tuesday).

The Embassy of Venezuela in Kingstown tweeted its congratulation, saying, “Chávez Did not plough the seas,” a reference to the late Venezuelan leader, Hugo Chavez.

SVG was represented at the summit by

CELAC was founded in 2011 to avert U.S. influence in the hemisphere and excludes Canada and the United States. However, Washington will be represented at this year’s meeting, with U.S. Special Presidential Advisor for the Americas Chris Dodd in attendance

This month, Kingstown had expressed fluctuating levels of confidence about its chances of winning the presidency.

On Jan. 4, while Gonsalves was overseas visiting Guyana after a trip to Brazil to rally support for the bid, acting Prime Minister Montgomery Daniel said, on radio, that SVG “will be elected to the chair and the presidency of CELAC”.

However, speaking four days later on his return to Kingstown, Gonsalves said he did not know if Kingstown would succeed but said it would be “very impressive” if the country did so.

Gonsalves said the CELAC presidency would put Kingstown “in a critical leadership position to help to define the dialogue which will take place between CELAC, consisting of 600 million people in 33 states, define the relationship between CELAC and the European Union over the next two to three years”.

He said that this year, CELAC will hold summits with the European Union, the African Union, India and China.

The prime minister said that even though SVG has diplomatic ties with Taiwan and not China, Beijing is a member of the Caribbean Development Bank and the World Bank, in which Kingstown participates.

“I am telling you this, though we didn’t go to the Security Council for … any transactional arrangement to see what St. Vincent will get, the fact of the matter is this, we have benefited significantly from being on the Security Council, and I see investments coming because of the increased profile and I see also soft loans which have come because of that improved profile,” he said as eh responded to people who he said question his travels.

Gonsalves said that three CELAC members — Brazil, Mexico and Argentina are in the G20  — the 20 largest economies in the world.

“Mexico is the number 11 or 12 economy in the world; Brazil is number seven or eight because under Lula first, number five or six,” Gonsalves said.

“I had to go and see Lula when Lula was inaugurated. They say what I went there for,” he said, adding that da Silva greeted him warmly at the inauguration.

He noted that no CARICOM country has ever held the presidency of CELAC.

“And Latin America-Caribbean unity is vital. And part of that vitality is to have a country from CARICOM hold the totem pole with the presidency,” Gonsalves said.

“I don’t know whether we’re going to be elected on the 24th of January, in Buenos Aires, Argentina. We have a reasonable chance. But if we do it, if we manage it, it will be a very impressive feat.”