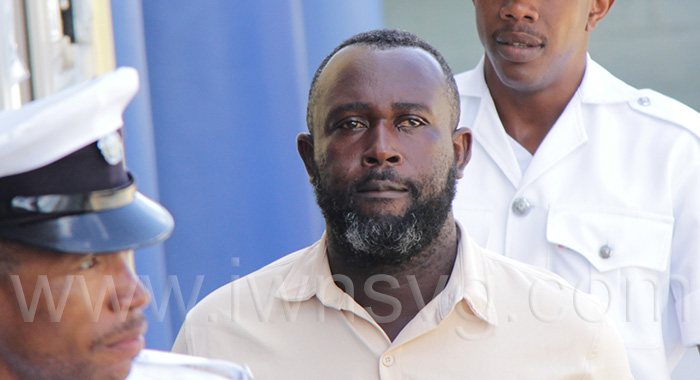 A man who is on bail on firearm and wounding charges has been found not guilty of breach of a court order in connection with his bail, his second such charge since Dec. 16.

Senior Magistrate Rickie Burnett handed down the verdict at the Kingstown Magistrate’s Court on Monday, less than a month after fining the man, Rolando “Street Law” Samuel, for wilfully disobeying a court order in connection with his bail.

Samuel, a 36-year-old labourer of Troumaca/Chester Cottage, was tried on Friday on a charge that on Jan. 11, at Chester Cottage, he wilfully disobeyed court order 356 of 2022 made by Chief Magistrate Rechanne Browne made at the Serious Offences Court on Nov. 30, 2022.

The prosecution argued that Samuel was met at a home other than his residence and this was in breach of his curfew.

However, the defendant said this was not the case and called a witness who testified that Samuel also lives at the house where he was found.

In handing down his verdict on Monday, Burnett noted that the prosecution tendered a bail bond in support of its case.

He, however, said that the bail bond only states that Samuel is to have no contact with the virtual complainant, is to report at the Rose Hall Police Station at specified time and is to observe a curfew for a specified period of the day.

“The defendant was found at a home in his district,” Burnett noted. “He gave evidence that where he was found, he was living there as well. He also brought a witness to corroborate his story that he is living at the house where he was found.”

The magistrate said that nothing on the bail bond specified where Samuel should be during the time of the curfew.

“It was extremely vague,” Burnett said.

“Now, a court, being faced with the scenario, would have a difficulty in convicting the defendant in that he was not found in a public space. He was found in a place that he deems to be his home,” the magistrate further said.

“Against that background, I am unable to convict him based on the evidence that is before me,” he further said, noting that if he is wrong, the prosecution has a right to appeal.

“But based on what was submitted before this court, the defendant is not guilty,” Burnett said.

After handing down his verdict, Burnett told Samuel:

“Before you go, I will say this is the second time you appear before me in relation to your bail. That is all I will say to you.”

Browne adjourned and transferred the matter to the Kingstown Magistrate’s Court for the hearing of the facts and sentencing the following day.

The court heard that on Dec. 17, about 9:15 p.m., police officers from the Georgetown Police Station were on mobile patrol about the district.

The facts of the case are that on Dec. 17, about 9:15 p.m., police officers from the Georgetown Police Station were on mobile patrol about the district.

In mitigation, Samuel told the court that he was at the Customs all day and was trying to get something to eat when the police met him.

In handing down his sentence, Burnett said that when a court grants bail, the court expects all the conditions must be obeyed.

“I have listened to the explanation even to you. I am not God to know if you are speaking the truth. But because of that, I’m not going to impose a custodial sentence,” Burnett said.

Samuel is slated to return to court on Jan. 23, 2023 in connection with indictable charges of possession of an unlicensed firearm and eight rounds of ammunition; possession of firearm with intent to endanger life; and three counts of unlawfully and maliciously wounding.

At his arraignment in November, the chief magistrate set his bail at EC$20,000 with one surety and ordered him to have no contact with the virtual complainant.

Samuel told the court that he was living in Troumaca and the chief magistrate ordered him to report to Rose Hall Police Station on Mondays and Thursdays between 6 a.m. and 6 p.m. and observe a 7 p.m. to 6 a.m. curfew.