Media not allowed at FSA meeting with BLA shareholders 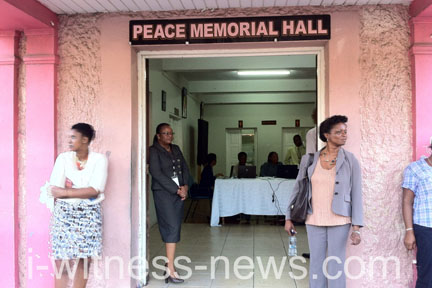 The media was not allowed at the meeting in Kingstown where the FSA met with shareholders of the BLA on Thursday, April 11, 2013.

KINGSTOWN, St. Vincent, April 11, IWN – The Financial Services Authority (FSA) did not allow the media to attend its meeting in Kingstown with shareholders of the Building & Loan Association (BLA) today — Thursday.

Reporters turning up at the Peace Memorial Hall, where the meeting is being held, were told that the talks, which were scheduled to commence at 5 p.m., were exclusively for shareholders of the building society and the FSA.

FSA staff at the entrance of the building said that the state agency will issue a press statement about the meeting.

In addition to the FSA staff stationed at the main entrance to the hall, other FSA officials were seated behind five laptop computers.

It seems that the computers were being used to verify the status of persons wanting to attend the meeting.

Attendees had to present identification documentation.

The talks on Thursday were the first between the FSA and BLA shareholders since the FSA assumed management and control of the 72-year-old BLA on Feb. 1.

The takeover came on the heels of a letter that raised questions about its management and financial health.

Luke Browne, a politician and economist at the Ministry of Finance, which was overseeing the BLA at the time, wrote the letter, published in a local newspaper on Jan. 18.

I-Witness News was also able to verify that Cools Vanloo and Jerry George, members of a committee of BLA shareholders elected in February and mandated to interface with the FSA, were also at the meeting.

The committee met with the FSA on March 12 and reported to shareholders on April 2.

An FSA staff member at the meeting said the talks did not have a scheduled duration. But some persons were seen leaving the meeting around 7 p.m.

Correction: An earlier version of this story said the FSA took over the BLA on March 1. The takeover was actually on Feb. 1.