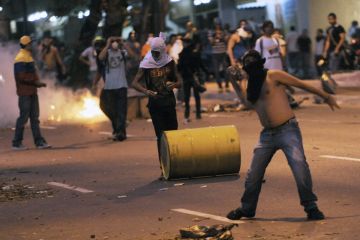 KINGSTOWN, St. Vincent, April 17, IWN – The general secretary of the ruling Unity Labour Party (ULP) has congratulated Nicolas Maduro on his election as president of Venezuela and sought to defang local critics of the razor-thin victory.

At least seven people were killed and 61 were injured in post-election violence across Venezuela, state media reported Tuesday.

Capriles has said that he won the election on Sunday, but officials have said that Maduro, whom Hugo Chavez handpicked to succeed him before he died last month, won the vote.

Maduro won the election with 50.8 per cent of the ballots to Capriles’ 49 per cent.

And Sen. Julian Francis of the ULP, speaking on his weekly radio programme on Tuesday, noted that Maduro’s “results are not as dazzling as those of Chavez”.

Chavez was re-elected last October by 10 percentage points over Capriles.

“… but while Maduro did not do that to that extent, he won the elections. He is the elected president of the Bolivarian Republic of Venezuela,” Francis said, as he extended congratulations on behalf of the ULP and government of St. Vincent and the Grenadines.

The NDP, led by Opposition Leader Arnhim Eustace, has accused Caracas of dragging Kingstown into its ideological war with Washington.

Kingstown and other capitals across the Caribbean and Latin America have benefitted from oil and other initiatives in Caracas, instituted by Chavez.

Capriles had vowed to discontinue the Chavez initiatives.

Francis said the ULP was pleased with the outcome of the election.

“We are, naturally, very happy that Nicolas Maduro has won the elections, which means it keeps the party of President Chavez in government in Venezuela much to the — I don’t want to say the wrong word. I better put it the other way. I am sure that the NDP is not very pleased with the results of the elections in Venezuela,” Francis said.

“I haven’t heard anything from them; but, I am sure that silently, in their hearts, they were hoping and wishing that Capriles will win the election,” Francis further stated, noting that Venezuela’s constitution allows Maduro a six-year term as president.

“We are all mortal and all sorts of things can happen, but we go, basically, on the election,” Francis said.

“I know there are a lot of people who say he just scraped through. … The margin, by popular vote, is 272, 865. … So, he won by just under 300,000 votes. That is about three times the population of St. Vincent and the Grenadines,” Francis noted.

He mentioned that 79.8 per cent of the 18.9 million people registered to vote in Venezuela cast ballots.

“… the most powerful president of any nation in the world is supposed to be the president of the United States,” Francis said, adding that in 2000, George W. Bush won the election with a minority of the popular vote.

“Their system is a little different from ours, different from Venezuela’s,” Francis said of the United States, where the person who wins the Electoral College, rather than the popular vote, becomes president.

“That is the margin by which he won and became the most powerful president. So, for those who want to decry the victory of Nicolas Maduro, I want to give you those figures.”

“That is basically 0.1 per cent more than Maduro,” Francis said of Obama’s second victory.

“I just want to throw those figures out, because I know you are going to hear this kind of talk and I just want to make sure that when we talk, we know what we are saying. So, I just wanted to prep you as to how things are going.

“President Chavez, there are not many like him. In fact, I am not sure that is another one like him. But, like the NDP here in St. Vincent when we won in 2010, they want to mash up the country,” Francis said of the protest in Venezuela,