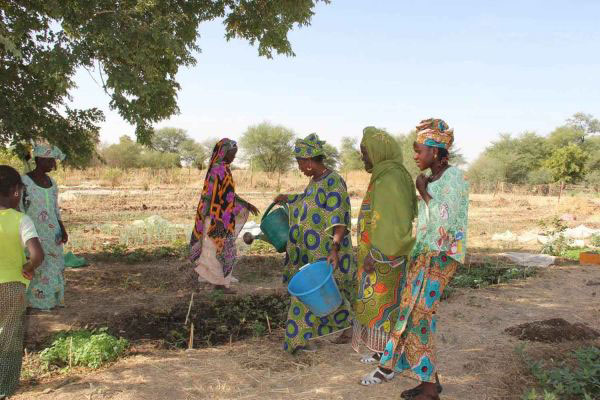 Drought in the Sahel region makes farming and gardening very difficult for the women of Yelimne, Mali. (Photo: WFP/Daouda Guirou)

April 17, 2013 – Stretching from Dakar to Djibouti, a United Nations-backed programme dubbed the “Great Green Wall” brings together 11 countries to plant trees across Africa to literally hold back the Sahara desert with a swathe of greenery, lessen the effects of desertification and improve the lives and livelihoods of communities.

The Wall, an initiative spearheaded by African heads of State, will stretch about 7,000 kilometres from Senegal in the west to Djibouti in the east and will be about 15 kilometres wide as it traverses the continent, passing through Mauritania, Mali, Burkina Faso, Niger, Nigeria, Chad, Sudan, Ethiopia and Eritrea.

The programme aims to support the efforts of local communities in the sustainable management and use of forests — a key theme of the 10th session of the U.N. Forum on Forests (UNFF10), currently taking place in Istanbul — as well as other natural resources in drylands.

Among other things, the planting of trees is expected to provide a barrier against desert winds and will help to hold moisture in the air and soil, allowing agriculture to flourish. It is also expected that the Wall will reduce erosion, enhance biodiversity and improve countries’ resilience to climate change.

According to the UN Food and Agriculture Organization (FAO), two-thirds of the African continent is classified as desert or drylands. Climate change has led to prolonged periods of drought; over-intensive farming and over-grazing have caused land degradation; and deforestation has turned once fertile land into desert in many areas.

Given the multiple roles they perform, forests are perhaps more important in arid zones than anywhere else, the agency pointed out. Forests in arid zones are rich in biodiversity which has adapted to extreme ecological conditions; provide vital ecosystem goods and services; constitute a buffer against drought and desertification; offer a safety net against poverty; and support adaptation and mitigation to climate change.

“We are aware that this is our territory. It is up to us to rebuild our systems, that is why we dove in first,” said Ndiawar Dieng, forestry expert and UNFF10 delegate from Senegal, one of the countries that first championed the idea of the Great Green Wall.

Senegal will do “all that is in our power” to solve the problem of desertification, Dieng added.

Efforts are already paying off in villages such as Widou Thiengoli in Senegal, where communities harvest fresh fruits and vegetables from the dry desert sands, a by-product of the Wall initiative, the UN World Food Programme (WFP) said.

Like many rural communities in Senegal, Widou Thiengoli’s villagers have experienced dramatic changes in climate over the past 25 years, WFP noted in a news release. The frequency of droughts has increased, rainfall levels have fallen by more than one-third and when the rains do finally arrive, many areas are hit by devastating floods.

WFP supports the Great Green Wall programme by providing food assistance for the community farming groups during the lean season before harvests arrive, helping to build resilience among these communities so that they are better equipped to cope with climate shocks.

“People used to go to towns to seek paid work during the lean season, but since the project started, that has changed,” says Papa Sarr, technical director of the National Agency of the Great Green Wall.

“With WFP’s help, they have been able to settle and cultivate this land, and they realize that they can feed themselves and earn money at the same time.”

Supporters of the Great Green Wall also include the U.N. Environment Programme (UNEP), the U.N. Convention to Combat Desertification (UNCCD) and the U.N.-backed Global Environment Facility (GEF) — the largest public funder of projects to improve the environment.

Ulrich Apel, forestry expert with GEF, said that judging from the feedback received so far, the Great Green Wall programme is “off to a promising start”.

He noted that while the GEF has long supported individual countries and farmers with various projects to improve the environment and their living conditions, the Great Green Wall is different owing to the sheer scale of the US$2 billion initiative and the amount of coordination involved.

He added that the Great Green Wall programme could be replicated in other regions, for example in Central Asia, to address common challenges such as land degradation, water management and mitigating the impacts of climate change.