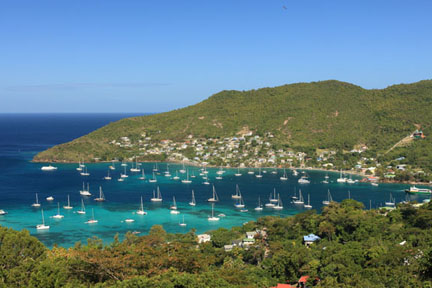 KINGSTOWN, St. Vincent, April 17, IWN – Parliamentary Representative for the Northern Grenadines, Dr. Godwin Friday, wants the government do more to protect yacht visitors (yachties), even as he said a patrol boat commissioned in Bequia this year seems to be working.

Friday, along with his Southern Grenadines counterpart, Terrance Ollivierre, and Opposition Leader, Arnhim Eustace, spoke on Eustace’s radio programme on Monday of the security concerns of yacht visitors here.

“It is extremely important that we sound the alarm when there are issues that create problems for the yachts as they come here,” Friday said in a telephone call to the programme.

“… because, when they stop coming or they come for shorter periods of time or come in fewer numbers, everybody suffers,” Friday further stated.

He added that his comments were “not a question of partisanship or trying to make the country look bad or that sort of stuff”.

Friday has repeatedly highlighted in Parliament, and via the media, the problems of crime against yachties in Bequia.

The Government this year commissioned a vessel to patrol the waters of Bequia, and Friday said that while the move “took way too long”, it seems to be working.

He said he hopes the patrol vessel will becomes a permanent part of the security strategy on the island and will inspire confidence in yachties to visit.

The opposition legislators noted the importance of the yachting sector to the local and national economies.

“It really is a trickle down effect,” Friday said, adding that he knows the impact on businesses when yachts don’t visit.

During that period, visitors to the country spent EC$143.3 million and Eustace said a significant amount of that figure was spent by yachties.

Further, of the 88,000 yacht visitors to the nine-member Organisation of Eastern Caribbean States in the first half of 2012, almost 28,000 of them came to St. Vincent and the Grenadines, Eustace said.

“It represents a big share of our tourist market. … It means that the revenue you earn for tourism is very dependent also on what is happening with the yachts. …

“So we really need to spend some time, the government needs to get their act together and spend some time trying to lift the levels, improving security so that people feel comfortable to stay here,” Eustace said.

But Eustace added that the figures have declined compared to previous years.

“And part of the reason for the decline in yachts is the lack of security given to yacht visitors for their boats when they come ashore to try to spend some money. And therefore, it is worth our while to provide some security… so that we encourage them to come, and stay longer when they come.”

“… the increasing level of robberies that we are having against tourists is a matter of grave concern,” Eustace said.

And, Ollivierre, in a separate call to the same programme, also noted the importance of the yachting industry to the national economy and the Southern Grenadines.

“And I know when things are bad, a number of people in the Grenadines suffer, especially those in the Southern Grenadines, because, you have quite a number of stakeholders who will depend on business on a daily basis to survive.”

He said that the situation is so bad at times that restaurant owners will provide security for yachts while the sailors dine ashore.

“It is really a sore point and something must be done,” Ollivierre said.

He said he met a few months ago with tourism stakeholders in Union Island and they mentioned the need for police presence in Clifton and suggested that a space can be provided at the Tobago Cays Marine Park Office for police presence.

“There has been a downturn in business,” he said, adding, “… the people are “crying” and some of them have reduced their staff “because they are trying to stay afloat”.

“And it is very good for the economy of St. Vincent and the Grenadines so it is more than time enough that we look at what is happening, sit down and take a critical look, and if we want this industry to survive, then we realise that we have to put measures in place in order to protect it.

“You are not only protecting the people who are coming but you are protecting locals, who take time to invest in business and in order for them to survive and also the people who work in this vital industry to be able to gain employment,” Ollivierre said.