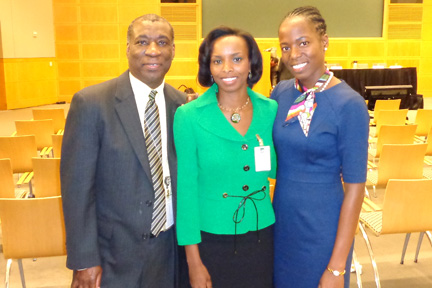 Two Vincentian economists are among the contributors to a new book  — The Eastern Caribbean Economic and Currency Union: Macroeconomics and Financial Systems — published by the International Monetary Fund (IMF).

The book, launched Thursday at the IMF headquarters in Washington, DC on Thursday was edited by Alfred Schipke, division chief in the Asia Pacific Department, Aliona Cebotari, and Nita Thacker, both deputy division chiefs of the Caribbean I (ECCU) Division.

The book takes a comprehensive look at the Eastern Caribbean Economic and Currency Union (OECS/ECCU) — one of four currency unions in the world — including its organization, economic and financial sector linkages; and proffers policy recommendations to foster economic growth. Other chapters focus on offshore financial centers, experiences with debt restructuring, and the regional capital market.

As in other parts of the world in the aftermath of the global economic and financial crisis, the region is at a crossroads, facing the major challenges of creating jobs, making growth more inclusive, reforming the banking system, and managing volatility, while grappling with high public debt and persistent low economic growth, a release about the publication says.

And, Sir K. Dwight Venner, governor of the Eastern Caribbean Central Bank, in an advance review, said the handbook on the ECC) “covers, at the institutional and policy levels, the critical issues that have impacted the stability and growth of the member countries of the ECCU, and which are informing the debates on the future of these countries.

“The handbook provides a compelling narrative on the functioning of the ECCU and is supported by a wealth of empirical data that will be extremely useful to public sector policymakers, the private sector, and the general public in the ECCU, as well as the international community,” Sir Dwight further said.

Min Zhu, deputy managing director of the IMF, delivered opening remarks for the event, which included a panel discussion moderated by Adrienne Cheasty, deputy director of the Western Hemisphere Department.

Among the attendees at the book launch and seminar were international diplomats, including La Celia A. Prince, Kingstown’s ambassador to the United States.

2 replies on “Vincentian economists contribute to IMF book on ECCU”