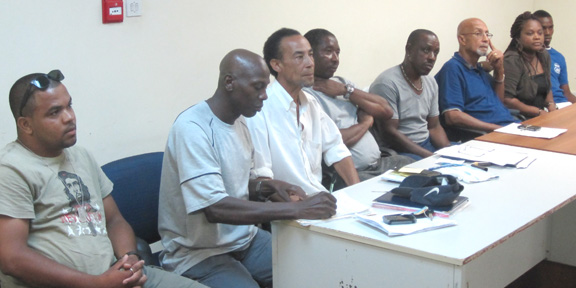 Pharmacist Tyrone Jack should be now busy setting the wheels in motion to dispense antidote to shed table tennis of all harmful bacteria and parasites — one week after being elected as president of the St. Vincent and the Grenadines Table Tennis Association (SVGTTA).

Jack easily defeated Harvey Graham in a lopsided contest at the meeting at the National Sports Council’s boardroom at Arnos Vale.

He underlined his confidence that he would be elected when he made a 10-minute acceptance speech from a prepared text, which left some members of the fraternity feeling very good.

The newly elected president thanked Sports Minister Cecil “Ces” McKie for the great efforts in “his many efforts in resuscitating the National Table Tennis Association”.

He also outlined the health benefits of table tennis.

Jack pointed to the lack of a youth development programme under the previous executive, saying that it was for that reason, among many others, that he “agonize[d] over the state of table tennis over the past five years”.

He lamented the absence of a home for the sport but did not mention seeking the effort of the minister to have this addressed.

His long-term priority areas, according to his prepared speech, were implementing a strategic plan. This will involve youth development; venues and equipment sufficiency and maintenance; financial viability, marketing and promotion; tournament, preparation and selection policy, ranking; constitutional reform and discipline; membership, social media and publicity.

Jack was forced to make a few adjustment to his address since Ronnie Daniel, whom he described as “someone in academia whose job require[s] him to be communicating with people from all strata locally and regionally”, declined nomination.

President Jack also thanked NOC Chairman, Trevor “Sailor” Bailey, and General Secretary, Keith Joseph, for helping to get the meeting and the outgoing executive under Alonzo Primus for facilitating a smooth transfer of the reins.

Primus had taken over from Sean Stanley who left the post under controversial circumstances in December 2007.

However, reports say that on Saturday there was very little in the manner of a smooth transfer with outgoing secretary Paul Velox being verbally abused by a businessman who is close to the sport.

According to those reports, the easy-going Velox was accused of being dishonest and indulging in nepotism.

An eyewitness said that with tempers matching the sounds from the nearby shooting range, some members objected to the abusive comments, and a break was taken to regain order, which never quite returned.

After discussions on the sport, election was then called and people who appeared to have been encouraged, coerced and influenced based on their impatience to get out of the room, then went about fulfilling the pre-meeting decisions.

One reply on “Tempers flare at table tennis executive election”