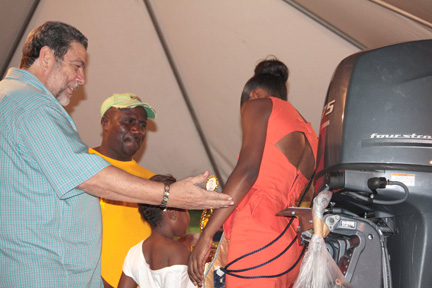 Fisherman of the Year 2013, Lenford Jack, receives an outboard engine, part of his prize, from Prime Minister Dr. Ralph Gonsalves. His daughter, Jayana, collect a trophy on his behalf from Miss SVG 2013 contestant, Brooke Legair.

KINGSTOWN, St. Vincent, May 21, IWN – Fisherman of the Year 2013, Lenford Jack, says some of the technology being introduced here to help fisherfolks find fish, are not suitable for the vessels used locally.

This year’s activities were held under the theme “New Technology, Fish Efficiently” and Fisheries officials at the Fisherman’s Day Rally at Calliaqua on Monday spoke of the potential benefits of equipment that can help fisherfolks track fish.

But Jack, who has been fishing for more than 20 years and owns a 37-foot trawler, said he still uses “the old modern day technology”.

“This technology that they are implementing is not for the type of boat that we use,” he told I-Witness News during an interview after he was announced as this year’s top fisherman.

“It is for more slower moving vessels. It is not for pirogues that travel 20 to 30 knots. It is for a boat that travels like say 10, or 11 knots … that you can map the bottom, that you can locate this fish. It is not the way that people describe it on land. It is actually going out there and finding out what affects the fishermen,” Jack said.

Jack further told I-Witness News of some of the challenges fisherfolks face when they return to land.

“The gas price, that is a big sacrifice. … Second, you catch your fish, the market is not there for you,” he said.

Jack further stated that while gasoline is almost $15 a gallon, fish fetch around $5 a pound and falls to $3.50 a pound when there is a glut.

“But you, the consumer, you will not $3.50 but you will still pay $8 or $7,” he said, adding that some vendors buy whole fish, slice them up, then retail them at inflated prices.

Jack further said that a fisherman selling around 100 pounds of fish to a vendor might count as much as 10 pounds as entrails and not charge the vendors for that 10 pounds.

“You, the local consumer, you are not going to get that guts weight. If you weigh a tuna seven pounds, you are gonna pay [for] seven pounds,” [including for the entrails] which was already deducted from the fisherman,” he said.

“So, there are things that we, the government, the Fisheries need to put in focus,” Jack said.

Meanwhile, Prime Minister Dr. Ralph Gonsalves, in his featured address, said that fisherfolks complain that they do not make enough money after taking the risk at sea.

He said fisherfolks say that vendors make the money.

The Prime Minister further said that while he doesn’t not want to put vendors and fishers against each other, if vendors are not reasonable, they will kill the goose that lays the golden egg.