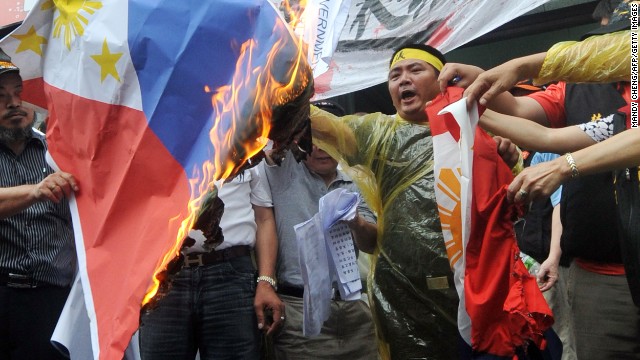 Taiwanese fishermen protest in Taipei on May 13, 2013 against the killing of a local fisherman by Philippine coastguards. (Photo: CNN)

The Taiwan embassy in Kingstown has described as “coldblooded murder” the killing of a Taiwanese citizen by a Philippine coastguard vessel on May 9.

The Taiwan embassy in Kingstown on Tuesday issued a statement on the development.

Taipei has recalled its diplomatic envoy from Manila, frozen applications from Filipinos seeking to work in Taiwan and held naval drills near Philippine waters.

The text of the release is published below:

On May 9 the Taiwan fishing boat Guang Da Xing No. 28 was fired upon by a Philippine Government vessel in overlapping ROC-Philippine economic zones, resulting in the death of fisherman Hong Shi-cheng.

Following the assault, the ROC Government asked that the Philippine Government respond to four demands: a formal apology, compensation, an expeditious investigation followed by the severe punishment of the perpetrators, and the speedy arrangement of negotiations on fishery matters. These demands are in accordance with international law and practice.

The Philippine Government has made an official apology conveying “deep regret and apology to the family of Mr. Hong Shi-cheng as well as to the people of Taiwan over the unfortunate and unintended loss of life.” The ROC Government acknowledges this apology but cannot accept the characterization of Hong’s death as “unintended.”

ROC investigators found 45 entry bullet holes from automatic weapons in the unarmed GDX 28. This represents an excessive and unnecessary use of force in violation of international law and the U.N. Convention on the Law of the Sea, which stipulates that in enforcing the law in their exclusive economic zones coastal states are limited to boarding, inspection, arrest and judicial proceedings, and may not undertake corporal punishment, of which killing is the most extreme type.

The ROC Government has have instituted 11 countermeasures that will remain in place until the Philippine Government takes more positive and concrete steps to meet its demands. It expects a cooperative investigation of the incident by the two sides, allowing for comparison of the evidence held by each side.