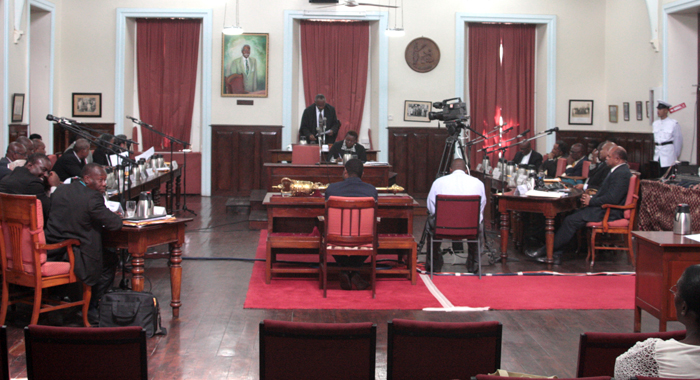 The Government is slated to go to Parliament on Thursday to ask legislators to approve loans totalling EC$208 (EC$1 = US$0.37) million for the construction of the Argyle international airport, Opposition Leader Arnhim Eustace says.

“Of course, the Finance Committee is majority government. It (the Bill) will go through,” he said.

“I was so shocked on seeing this, I thought I saw 208,000 [dollars]. I found the thing unbelievable so I started to look at the various items that could make up all this amount of money,” he said,

Eustace said the Bill — Supplementary Appropriations No. 4 of 2013 — is the largest he has seen in his 15 years as a parliamentarian.

Of the $204.8 million to be allocated to the Ministry of National Security, $56 million for the continuing construction of the Argyle international airport is to be raised from the sale of Government assets, namely 58 acres of land in the Southern Grenadine island of Canouan.

Some $2 million is expected to come from sale of Government shares in the Bank of St. Vincent and the Grenadines.

Another $107,200,000 is earmarked for the continuing construction of Argyle airport.

The Government will ask legislators to approve borrowing from Mega International Commercial Bank Co. Ltd. in Taiwan, another $26.8 million to provide funds for the construction of airport.

A loan of $14.69 million for the airport will also come from the Bank of Nova Scotia, Canada.

A further $3.5 million will go to meet the debt services associated with new borrowings of $148 million for the Argyle airport

“You hear what is going to the Finance Committee tomorrow?” said Eustace, a former Minister of Finance.

Parliament in January approved a budget of $799.1 million for this year.

“What is the point of the budget really? So, you spend an additional 208 million [dollars] — every cent to go to the airport, including interest we have to pay on those things. You see where we are? We talk about the finances of this country all the time, people don’t want to hear — some people,” Eustace said.

He said that when he saw the document Monday morning, it “nearly shocked the life out of me.

“I couldn’t believe it. It is to go to the Finance Committee tomorrow … and when I looked at it, I really could not believe it,” he said.

The Argyle international airport, the largest capital project in this nation’s history, is budgeted to cost EC$652 million.

It is slated to be completed by early 2014 and become operational later that year.

Government senator, Julian Francis, last week rebutted in Parliament “this myth” that he had said that the airport would have been constructed debt free.

He said a recording of his statement was edited to omit his explanation.