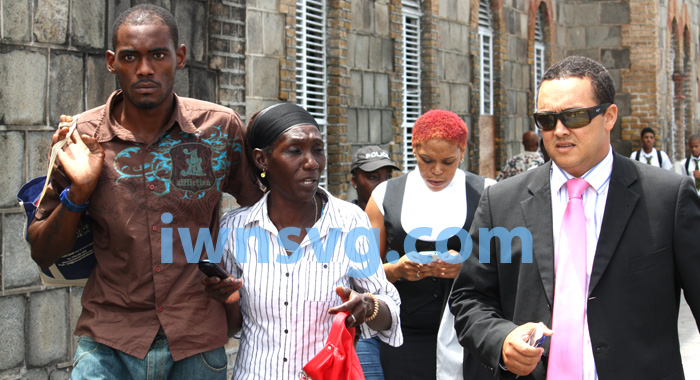 The man who surrendered to police on Monday in connection with the robbery of a postal worker and the shooting of a police officer in Kingstown on Thursday was freed on Wednesday without any charges being laid against him.

“Well I feel good to be out of lock up, but still they done assassinate my character already. But such is life,” Dwaine Sandy told reporters moments after his release just before 11 a.m.

Sandy and his lawyer, Grant Connell, arrived in St. Vincent on Monday from Grenada and Sandy was taken into police custody at 10:50 a.m.

When the 48 hours during which police can hold a suspect without charging them elapsed, they were forced to release Sandy, whom they had last week listed as “wanted” and had said should be considered “armed and dangerous”.

Sandy, speaking at his lawyer’s chambers in Kingstown, said he left St. Vincent for Grenada around “Carnival launching” in May, where he went to look for work.

He said he was working in landscaping in Grenada three days a week and sent money back to the mother of his child from that neighbouring island.

“On the said day I was being accused of the crime, I put up pictures on Facebook — the 13 of June — with the Grenada flag (at the place where) I used to stay. … And tell them stop calling up my name on Facebook,” Sandy told reporters.

He further said a friend sent him a text message saying he was wanted here and encouraged him to stay in Grenada.

Sandy said journalist Douggie “Nose” Joseph facilitated the contact with the lawyer, who travelled to Grenada to escort Sandy back to St. Vincent.

Asked about reports that a female at a house where police went on Saturday told the lawmen he had just left, Sandy said that was “impossible”.

He said Connell was supposed to go to Grenada on Saturday to escort him back to St. Vincent.

“How could I leave Saturday night when he (Connell) was supposed to come for me in Grenada? That is impossible. It is just talk, talk,” Sandy said.

He further said one of the investigating officers is a relative of a woman with whom he has a child.

He further told reporters that while in custody, he slept on the cold floor in handcuffs.

The lawyer further said Sandy was made to eat with the handcuffs on Tuesday night.

“Three days now I can’t go to work,” the woman, who works at a furniture company, said.

She said she found out by television and Facebook that her son was wanted.

“The Black Squad (Rapid Response Unit) and them come Friday and they have gun pointing all inside me face; rush into me house Friday. And Sunday they came back again,” she further said, adding that the police officers questioned her about the whereabouts of her son.

Sandy was released after his lawyer objected to an identification parade that the police arranged “at the last minute” in relation to an matter that allegedly took place in Green Hill three months ago.

“… and they had eight, I think prisoners, who are in custody who are of similar height — maybe 5’-11” or six foot — and wanted to have an ID parade and I objected to that because some of the prisoners who were in prison, they were incarcerated at the time they allege my client did something.

“That alone rebuts common sense and there were extreme difference in height, so we objected to that and the 48 (hours) was up and inspector Williams released them. The investigating officer (Station Sergeant Hesron Ballantyne) wasn’t even there. He was out on duty,” Connell said.

The lawyer further said the police did not return his client’s money and clothes, nor his passport, which they said is the property of the Government.

Connell on Tuesday wrote to Commissioner of Police, Keith Miller, noting that 30 hours had elapsed since Sandy turned himself in but no charges were brought against him.

The lawyer suggested that the police take Sandy to the hospital where the injured cop is wanted and ask him if Sandy was the person who shot him.

“I am informed by my client that the Commissioner passed him this morning, stood up and looked at him for a minute and then left. I don’t know if that is post letter syndrome or the alternative to PMS,” said Connell, who said the Commissioner “has been swimming beyond his depths from the beginning”.

During the robbery last week, a postal worker was relieved of some EC$100,000 (EC$1=US$0.37). Police officer Jolani Jack was shot, reportedly three times when he went to assist the postal worker. He is said to be in and is listed as in critical condition.