Calypsonian checks out of hospital to compete in semis 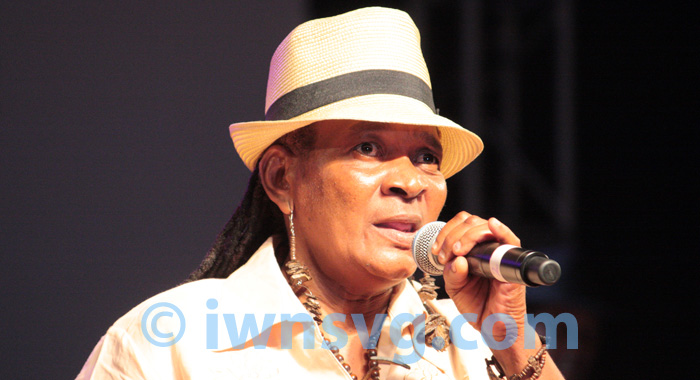 Veteran calypsonian Bridgette “Joy-C” Creese checked out of the Milton Cato Memorial Hospital on Friday to compete in the National Calypso Monarch Semi-finals, having suffered a stroke Tuesday night.

Joy-C, a former National Monarch and Queen of Calypso, shuffled onto the stage when her name was announced, her right hand looking limp and with limited mobility in her right leg.

After her performance, Joy-C told I-Witness News of the “semi” stroke she suffered.

“My right hand and my foot have no feelings. They are numb, but my mouth is alright,” she said in an interview backstage.

“This was the devil’s work, but God made sure my mouth was there to use,” she further said.

“I am in hospital now, I just checked out to come and sing. I am going back there now,” she told I-Witness News.

It is not the first time that Joy-C was battling ill health in the national calypso competition.

In 2010, she won the monarchy when she performed one of her songs, “Cries of the Grand”, while sitting in a wheelchair, having received a cut to her ankle in the lead up to the competition

She won the crown in 2010 on her return to the competition after a four-year hiatus during which she successfully battled cancer.

But Joy-C was not the only artiste who battled physical adversity during Friday night’s show.

Kirk “Ninja” King developed on Thursday a problem with his throat that left him hoarse on Friday.

He said it was “rough” performing like that. Neither of the artistes made it to the final round of the competition.