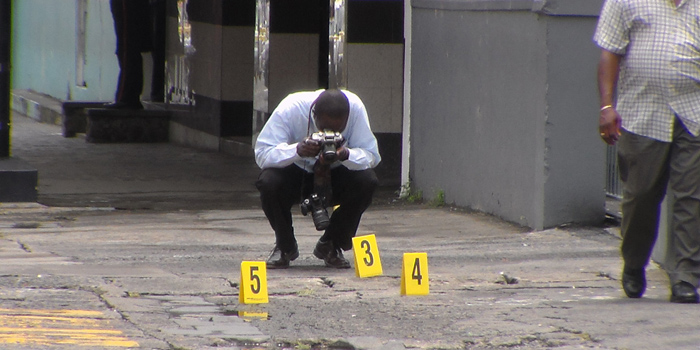 In this June 13, 2013 photo, a police photographer works at the scene where a cop was shot in Kingstown. (IWN photo)

The arrest by Vincentian police of a man in Grenada in connection with a murder here in May could help to solve the case of the June 13 robbery in Kingstown, sources tell I-Witness News.

I-Witness News is withholding the name of the man because we have not as yet been able to verify with police that he is indeed a suspect in the murder case.

But well-placed sources say that the man was wanted in connection with the May 5 murder of Devon “Jahjust” Steele, who was gunned down in Rose Place, Kingstown.

Jomorni Tash, 21, of Rockies was charged with Steele’s murder and remanded in custody until October 21 for a preliminary inquiry.

But the arrest of the man on the weekend could help police unravel the case of the daring robbery of some EC$100,000 from a female postal worker and the shooting of a police officer who went to assist her in Kingstown on June 13, sources say.

The arrest of the suspect could also have implications for Dwaine Sandy, who police have arrested and released twice in connection with the June 13 crimes.

Sandy, a former national footballer, has maintained that he is innocent.

Police had distributed poster saying that Sandy was “wanted” and should be considered “armed and dangerous”.

He returned from Grenada last Monday accompanied by his lawyer, Grant Connell, and was taken into custody.

But Sandy was released without charge around 11 a.m. Wednesday and arrested again around 3 a.m. Thursday, then released Saturday morning, again without charge.

A police source told I-Witness News earlier this week that they had identified another suspect in relation to the robbery.