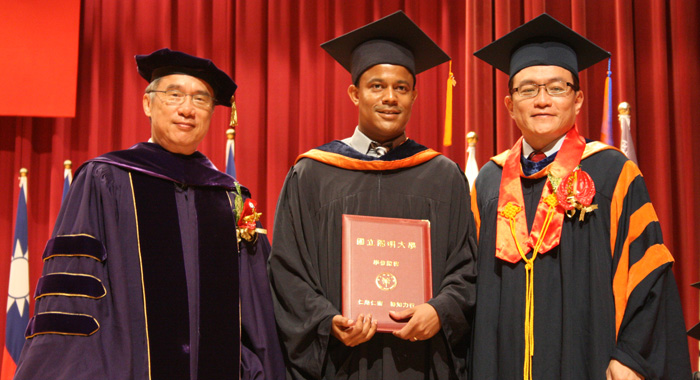 Dr. Rosmond Adams, centre, and officials of the National Yang-Ming University in Taiwan .

Rosmond Adams, a Vincentian recipient of the Taiwan International Cooperation Development Fund (Taiwan ICDF) Scholarship, excelled in his studies and graduated from the National Yang-Ming University in Taiwan with a master’s degree in International Health.

As a student of distinction, he was invited to make farewell remarks on behalf of the international students at the graduation ceremony on June 8.

Adams won the 2nd prize at the Taiwan ICDF Thesis Contest and will present a research report at an international conference on health in Australia in July.

Adams, a medical doctor from the Milton Cato Memorial Hospital, had visited Taiwan for a 12-week clinical training programme organized by the Taiwan International Healthcare Training Center (TIHTC) a year earlier prior to being awarded the Scholarship in 2011 to pursue a master’s degree in international health at the National Yang-Ming University.

He wrote a master’s thesis entitled “Willingness to Participate and Pay for National Health Insurance in St. Vincent and the Grenadines” and won the 2nd prize in the category of Public Health and Medicine at the 2013 TaiwanICDF Thesis Contest in April.

Additionally, Adams has been sponsored by Taiwan’s National Science Council to travel to Sydney, Australia in early July to present a research report on “Using National Health Insurance as a Financing Tool towards Achieving Health Care in St. Vincent and Grenadines”.

The Government of the Republic of China (Taiwan) has been supporting St. Vincent in nurturing its youths and promoting the mutual understanding and friendship between the two peoples.

As of 2013, over 70 Vincentians have received Taiwan’s scholarships and quite a few of them have graduated and returned to serve the country.

Some graduates working for the government are involved in bilateral cooperative projects between SVG and Taiwan. These arrangements have been highly conducive to the sustainable development of St. Vincent and the further enhancement of the existing cordial relations between the two countries, the Taiwan embassy said.

Adams told I-Witness News that he is a member of the International Health Economics Association, which will hold its ninth world congress on health economics in Australia from July 7 to 10.

“I will deliver a presentation on using national health insurance as a financing tool towards achieving universal health care in St. Vincent and the Grenadines. I will also chair a session entitled ‘Public Health Issues’ at the conference,” he further told I-Witness News.