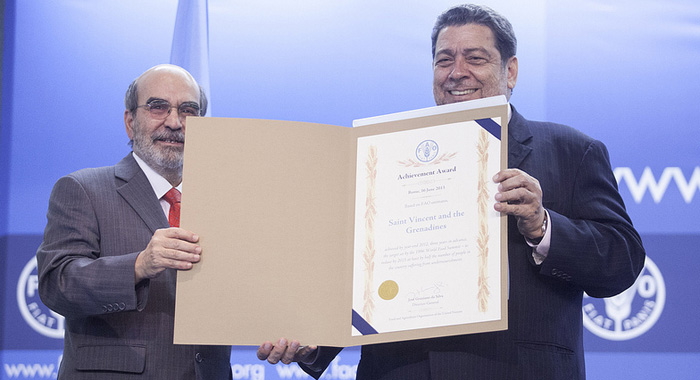 The director-general of the Food and Agriculture Organisation (FAO) is slated to visit this country for two days in July.

The visit by José Graziano da Silva comes on the heels of this country being among 38 nations recognised earlier this month in Rome for halving undernourishment, ahead of the 2015 target.

Prime Minister Dr. Ralph Gonsalves says da Silva will attend the CARICOM summit before arriving in this country on the night of July 9.

He will leave St. Vincent on the morning of July 11.

Gonsalves said he will take the FAO head on a tour of St. Vincent.

“I want him to see how we do work on small farms … to see how people make living — how we have gotten to where we have gotten but yet how we need his help to do more, and the help of the international partners.”

Gonsalves said he held talks with da Silva in Rome.

“… when I spoke to him, I told him one size doesn’t fit all. Countries which are small like ours, they are sui generis, of its own special kind, and very specially targeted measures have to be used with particular sets of resources to assist us,” he said.

One reply on “FAO director to visit St. Vincent in July”