Choosing a secondary school, one student opts for religion over prestige 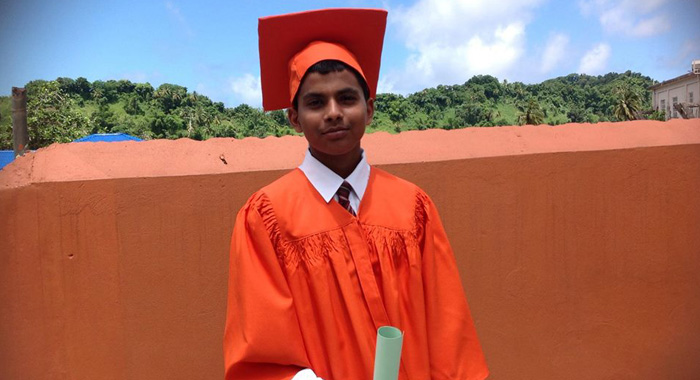 Kyle Sutherland, who placed 3rd for boys and 7th overall in Common Entrance, has decided to continue with an Adventist education.

When most people think of the school that the student who placed 3rd for boys and 7th overall in the Common Entrance Examination would attend, they probably would imagine the St. Vincent Grammar School (SVGS).

And why not? The all-boys school, the nation’s oldest secondary school, is traditionally home to the top male performers in the CEE, while their female counterparts go to the Girls High School next door.

In fact, some people jokingly say that if the resources to be distributed to the nation’s secondary schools were two loaves of bread, Grammar School and Girls High would get half a loaf each, and the remaining loaf would be distributed among the other school.

But notwithstanding, Kyle Sutherland — who placed 3rd for boys and 7th overall in the CEE — will not attend the SVGS in September.

He will also not attend the St. Martin’s Secondary School or even Thomas Saunders Secondary, both of which are also located in Kingstown and are generally regarded with more prestige.

The 11-year-old said he feels “good” about his performance in CEE.

He will continue his education in the Marriaqua Valley, at Mountain View Adventist Academy, sister school to the Richland Park Seventh Day Adventist School, from which he graduated valedictorian on Wednesday.

And, yes, the decision has to do with religion.

Kyle is son of Hannif and Ronda Sutherland, and his mother told I-Witness News that the family supports their son’s decision to continue his religion at an Adventist school.

“He has his heart set on going to the Mountain View Adventist Academy which is the sister school of the Richland Park SDA Primary,” she told I-Witness News.

“He feels that he wants to continue the Adventist education. We are supporting him on his decision — he made that decision …” she further said.

He was the only student from his school to be among the top 10 performers.

“One of the things that are significant about that school is the emphasis on spirituality,” Mrs. Sutherland told I-Witness News.

She said Kyle developed a relationship with God from a young age.

“They will start their school day focusing on God and, in addition to academics, they had several programmes over the school term where a lot of emphasis was placed on God,” she said.

Kyle used that approach when preparing for his exam.

“Before he starts to study, he would always pray. Several times when he met different problems and so on, he would stop and pray, and, even in the exams, he mentioned to us that when he got to certain questions and he couldn’t figure out the answer, he would just say a little prayer. I think more than any other school, the Seventh Day Adventist School stresses reliance on God,” Mrs. Sutherland further said.

The parents said that at home they created an environment in which study was part of Kyle routine and homework time was special.

He read extensively, worked on past papers, and paid attention to the news every day, they said.

Kyle was one of the students from rural schools that placed in the top 10.

And while some parents try extremely hard to get their students enrolled in certain primary schools, especially in Kingstown, Mr. Sutherland says he does not believe urban school are better.

“For example, the teachers in this school are extremely focused on the student, which is extraordinary. In the school, there is a caring environment. While that may exists in other schools, there is a very supportive environment … That plays a very important part in the morale of the students and also in the way the students eventually approach life problems and so on,” he said.

Mr. Sutherland further said that there are not a lot of distractions at the Richland Park SDA Primary.

He said there is an agricultural programme, but not much sports because of the location of the school, on the ground floor of the Richland Park SDA Church

And Kyle’s laudable performance came even as he wrote the exam while grieving the passing of his great grandfather the Friday before the exam.

His parents say they were worried that this would have impacted his performance.

“In spite of all of that, he was so successful in the exam,” Mrs. Sutherland said.

6 replies on “Choosing a secondary school, one student opts for religion over prestige”