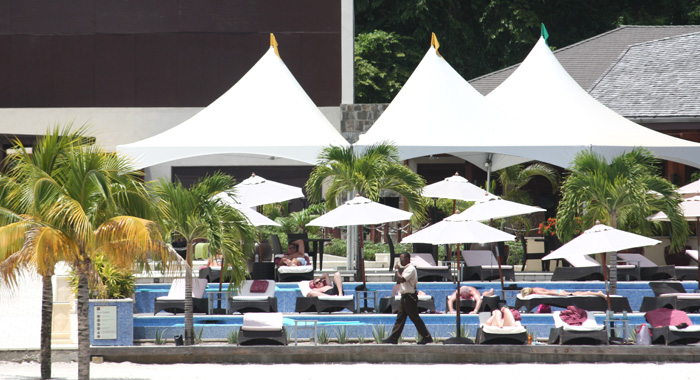 A security guard walks by as guests sunbathe at Buccament Bay Resort on July 4, 2013. (IWN photo)

The manager of Buccament Bay Resort said they were not speaking to the media on Thursday amidst reports that the electricity supply at the resort was disconnected.

Sources in the know told I-Witness News that the electricity was off but did not know why.

VINLEC, when asked if there was a problem with the supply in Buccament Bay, said “in the vicinity of the resort”.

But the entities bordering the resort on both sides had power when I-Witness News visited just before noon Thursday.

I-Witness News asked to see the manager and a front desk employee went to the manager’s office and returned after a few minutes saying, “The manager does not want to talk to the media today.”

Asked why, the employee said the manager was in a meeting.

The employee, when asked, said they could not say whether there was an interruption to the electricity supply at the resort.

Roof lights were on in the dining area at the front of the resort, but I-Witness News was unable to verify the source of the electricity.

But things seemed normal at the resort with guests and staff walking about and guest lounging on deck chairs and reading books at the beachfront while others swam in the pool and the sea.

A public relations firm in Barbados, when contacted, said they no longer work for the resort.

Further, a call to the mobile number of a senior resort spokesperson went unanswered and I-Witness News understand that the publicist no longer works for the resort.

The Buccament Bay Resort is owned by Harlequin Property, a British firm that is the source of legal challenges in the United Kingdom.

Prime Minister Dr. Ralph Gonsalves said in February that while his Government has given many concessions to the resort, he has told state officials that on the issue of electricity consumption, they should be dealt with as with any other customer.

“I said deal with people in arrears in the way in which you always deal with your big customers who are in arrears, or any other customer for that matter.

“You notify them and you give them a time to settle and if they don’t make arrangement to settle, you do what you have to do — you cut them off,” Gonsalves said then.

Gonsalves further said the resort is the largest consumer of electricity here — about $300,000 a month.