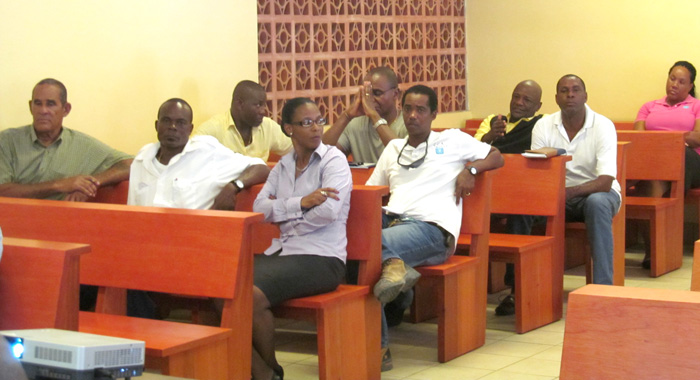 A segment of the audience at the consultation.

More development work is in the pipeline for Canouan and the developers, Canouan Resorts Development (CRD), want to keep the residents in the loop, CRD said in a release.

Last week, CCA Ltd., the design and construction company of CRD led by the General Manager, Elena Korach, interacted with a group of leading Canouan residents, to provide them with more information in relation to the proposed development work.

Also in attendance were Head of the Grenadines Directorate Department, Edwin Snagg, Permanent Secretary, in the Ministry of National Security, Godfred Pompey, and Joseph “Burns” Bonadie, the adviser to the government on labour relations.

Among the proposed plans was the construction of a ring road in the Grand Bay area, to facilitate the smooth flow of movement and to protect pedestrians from vehicular traffic while opening up other areas for possible development. This will allow villagers and guests will be offered a whole new pleasant experience when strolling along the main road with shops and scenic landscaping.

The plans also included the relocation of the library and vegetable market, the construction of new sporting facilities and a temporary jetty, and the provision of water fountains in strategic areas in Grand Bay.

The whole exercise is expected to cost some EC$30 million. CCA has committed to conduct a full environmental impact assessment study, before undertaking the development work, the release further said.

During the lively discussion that followed, it was determined that there was a need for an inventory of skilled labour among the people of Canouan. The residents also suggested that CCA Ltd. also examine the possibility of constructing a recreation center for the elderly.

A further meeting with the residents is planned for August.

One reply on “More development for Canouan”