Data that resulted in FAO award came from Gov’t 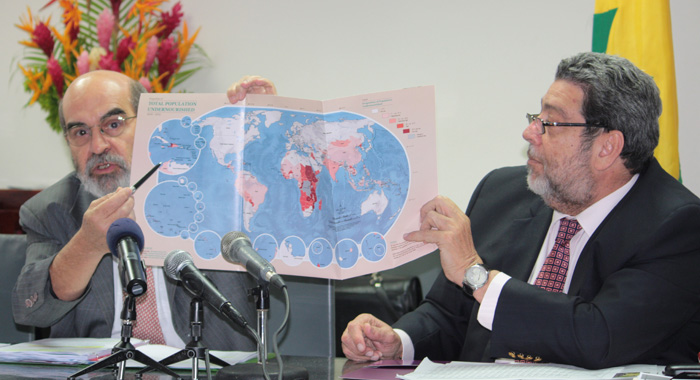 Director-General of the FAO, José Graziano da Silva, right, notes that on the FAOs map, St. Vincent and the Grenadines, is in white, among nations that have 5 per cent of their population undernourished. Prime Minister Dr. Ralph Gonsalves is at left. (IWN photo)

The Food and Agriculture Organisation (FAO) used data provided by the government and other methodology to determine that undernourishment here was halved ahead of the 2015 deadline.

St. Vincent and the Grenadines is one of 38 countries the FAO recognised last month for reaching the goal.

“This a methodology that we use in 190 countries around the world and it is based on local information provided by the government,” he said.

“Basically, we estimate how much food is produced in the country, how much is exported and how much is imported and the waste we have between the transaction. That brings us to per capita availability of food that is to be consumed internationally in the country,” he further explained.

da Silva said the FAO also considers “income distribution and the different indicators of how the people get the vitamins and micro nutrients and other things to provide their daily food.

The FAO chief noted that SVG was also among 18 countries recognised for meeting the World Food Summit goal of halving the absolute number of hungry people by 2015.

He consulted a map which showed that St. Vincent and the Grenadines is in white — among nations such as the United States and Canada, that have achieved the target of having less than 5 per cent of their population undernourished.

“In the whole region, only a few countries have achieved this goal,” said da Silva, a Brazilian, mentioning that Guyana, Nicaragua, Peru and Venezuela and Cuba are also among them.

He further added that Barbados and Dominica were already below the 5 per cent mark when computations began in the 1990s.

“It is very important to highlight that St. Vincent is the country that made the best progress in the region,” da Silva, however, said.

“St. Vincent is among the developed countries when we talk about undernourished people. So, again, I will like to congratulate the government and people of St. Vincent and the Grenadines for this achievement — so important for us,” the FAO head further said.