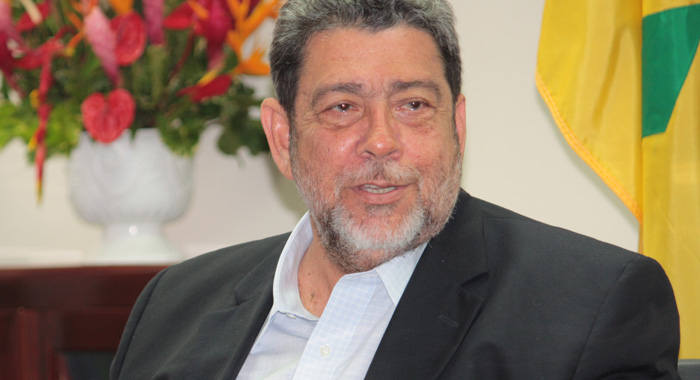 Prime Minister Dr. Ralph Gonsalves said Monday he would instruct his lawyers to seek apologies from two newspapers for comments they published on Friday.

Gonsalves said he wants an apology from The Vincentian newspaper and its columnist, Dr. Kenneth John.

He will also seek an apology from The News newspaper for comment made in a letter by pharmacist, Matthew Thomas, one of Gonsalves’ former political colleagues.

Gonsalves told a press conference that the statements are defamatory.

“If you read The Vincentian newspaper with Kenneth John’s column, … he says that Vynnette’s case is … another of the charges that the comrade planned or countenance against his political enemies,” the prime minister said.

Sen. Vynnette Frederick will reappear in court on Wednesday in relation to nine charges against her.

“Now, to say that I, as Prime Minister, planned to charge Vynnette is an outrageous libel. And I am sure that when the editor, Cyp Neehall, looks at it and the Managing Editor, Desiree Richards, who are all good people, [they] would see that what Kenneth John wrote there is rubbish,” Gonsalves said.

“Kenneth has defamed me before but I had let it slide and I really don’t like to be asking apology from a fellow who was once my teacher and who I played cricket with and he is in declining years and not in good health,” he further said of the columnist who has been writing for some 30 years.

“But this kind of a rubbish, to impute that of me, to state that of me, is undermining people’s public confidence in the judicial system, without any reason whatsoever, just based on falsehood and malice.

“And that he would know that if I had done what he said I had done, I would be guilty of misbehaviour in public office, a criminal offence, which would subject me to one year imprisonment,” Gonsalves said of John, who, like him, is also a lawyer.

“Similarly, I see The News published an article by Matthew Thomas that the Gonsalves-led administration had instituted the criminal charge of sedition against Ordan Graham,” Gonsalves said.

Graham, a former leader of the Green Party, was charged with sedition in relation to comments he made at a political rally.

“I’m the DPP (Director of Public Prosecution)?” Gonsalves said in response to the letter writer’s comments.

“… everybody has to be careful on this matter,” the Prime Minister said, adding that sometimes when people defame him “in a personal sense” he lets it slide.

“But when you say that I interfere with the justice in the country or I prosecute somebody or I arrest somebody — and I am indicating it to everybody who publishes it, including some fellows who publish some things like these on one or two sites, I would have to take those on to,” Gonsalves said.

“There are species of allegations which go to the governance of the country. That is to say, that I interfere with prosecution, that I order arrest, and they know it not to be true. But they are using those dastardly falsehoods to see if they can mobilise people’s opinions,’ he further stated.

The Prime Minister also cautioned Executive Editor of I-Witness News, saying that some comments on the website could put the online publication at risk of defamation lawsuits.

Gonsalves has successfully sued several persons and at least one radio station, NICE Radio, which paid out EC$200,000 in damages earlier this year.