‘Opposition has a duty to be proportionate,’ PM says of protest 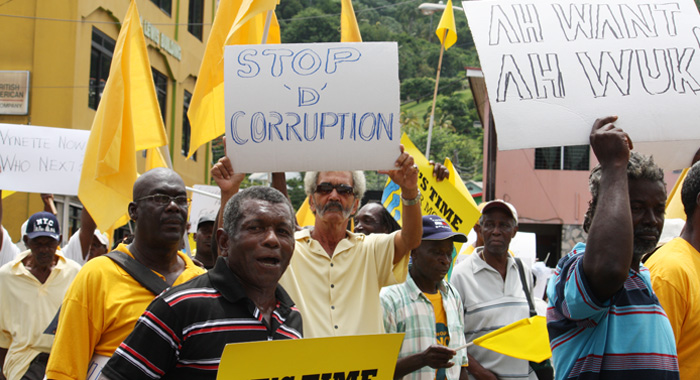 Prime Minister Dr. Ralph Gonsalves has criticised the opposition New Democratic Party for the scale of its response to the arrest of Senator Vynnette Frederick.

Frederick, an opposition lawyer and opposition lawmaker, was arrested on July 11 and slapped with nine charges relating to false declarations, swearing falsely, and fabricating evidence.

She is slated to return to court today (Wednesday) in connection with the charges.

The opposition New Democratic Party organised protests rallies on July 20 and 23, and a protest march and rally in Kingstown last Friday to show solidarity for the embattled senator.

Gonsalves, speaking at a press conference on Monday, said persons were wrong in saying the arrest of the senator was illegal.

He, however seemed to give credence to the argument that the arrest was humiliating.

“If it is embarrassing and humiliating, you do something which is measured,” he however said.

“You issue a statement about the embarrassment and the humiliation.”

The charges against Frederick stem from the contents of affidavits as part of criminal complaints against Gonsalves following the 2010 general elections.

Some persons have criticised the public arrest of the senator — during lunch at a restaurant, saying summons could have been issued instead.

“… if she expects a special treatment that she be not arrested and charged in that particular manner, one would equally say that you would have the responsibility, nay the obligation, not to tell a lie about the Prime Minister, carry a charge to the court which was based on a malicious falsehood and then go and swore [swear] falsely in the affidavit before the High Court and the Court of Appeal and only to concede after you were found out, that it was an error caused by inadvertence,” Gonsalves said.

Frederick has said she inadvertently inserted erroneous information in one of the affidavits.

“Because if you expect a special treatment, it follows, as the night follows day, that your own obligation, you must not act with reckless disregard of the facts and you must not act with an abundance inadvertence of in the making of your error,” the Prime Minister said, but added that he was not commenting on Frederick’s guilt of innocence.

“But I can still nevertheless say that what she did was to make a statement which is false…” he further said.

“What you have was this lack of proportion,” he said of the opposition’s response.

“A ruling is rendered. Certain things happen afterward. The opposition has a duty to be proportionate. And that is why there are people who were left confused and bewildered. Because the reason for the protest, within 24 hours, was shown to be no reason whatsoever, so they then had to scrounge around,” Gonsalves further said.

Frederick was arrested hours after a court threw out six charges against her stemming from the same affidavits.

5 replies on “‘Opposition has a duty to be proportionate,’ PM says of protest”