Thousands turn out to Opposition protest in Kingstown 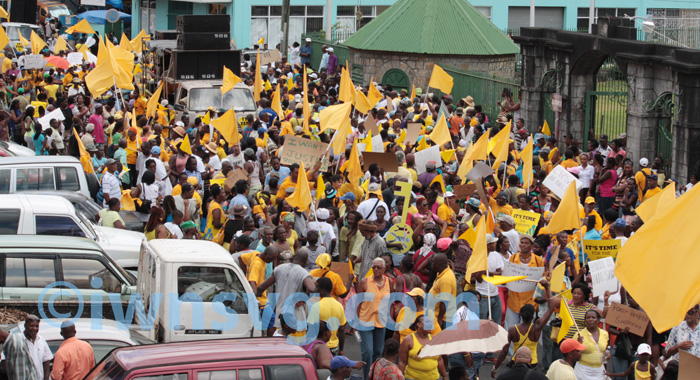 Thousands of supporters of the opposition New Democratic Party marched and rallied in Kingstown on Friday, July 26, 2013 (IWN photo)

Opposition Leader Arnhim Eustace, speaking to supporters outside the Financial Complex, where the Office of the Prime Minister is located, repeated his call for general elections before yearend — two years ahead of the constitutional deadline.

Eustace said that the protest was originally organised to show support for embattled opposition senator, Vynnette Frederick, but widened to include “a lot of the problems that we face here in St. Vincent and the Grenadines”.

“People are suffering too much in St. Vincent and the Grenadines. And everyday, I have to face people coming to my office or calling me at home or meeting me in the street, and everybody is complaining,” Eustace said.

“Even their own supporters are complaining that things are very hard,” he said in reference to the ULP government.

“Sometimes, I wonder how some people make it from one day to the other,” he said, adding that persons cannot pay their utility bills and businesses are closing down.

“We are saying it is time for them to go. The time is now…” Eustace said, adding, “We can’t afford that anymore.”

As the protesters departed from the NDP headquarters on Murray’s Road, the march, which began mid-morning Friday, immediately took on a carnival-like atmosphere, three weeks after Vincy Mas 2013 ended.

Trucks blasted amplified soca music and protesters danced in the street and waved placards and large yellow flags — the colour of the NDP.

As the protesters made their way through Kingstown, one could have easily mistaken them for a carnival band on account of the music and the flags.

“Vynnie V is all ah we”, one placard read, while another said ,“Victimisation is now an institution.” Yet another said, “It’s time for fresh ideas.”

Among the protesters were opposition parliamentarians and members of civil society, including immediate past president of the Bar Association, Kay Bacchus-Browne.

The Bar Association has condemned the arrest of senator Frederick, saying it was unnecessary and intended to embarrass and humiliate her.

Businessman Leon “Bigger Biggs” Samuel, who has had his licence to mine aggregates at Rabbaca revoked, carried a placard that read “Little me can’t fight against the mighty U.L.P.”

The revoking of Samuel’s mining licence has brought his block-making business to a halt and placed his investments, said to be in excess of EC$7 million, in jeopardy.

Anglican Priest Father Ulric Jones, wearing a clerical shirt and a tab collar, carried a placard that read, “If one member suffers all suffer together. 1 Corinthians 12:26”.

The PSU represented the Port Police, which is to be disbanded on July 31.

The Government decided to disband the outfit after they held a one-day sickout earlier this year to highlight labour issues, including the non-payment of increments.

Gonsalves said that the sickout compromised the nation’s port and put the country at risk of sanctions under the International Ship and Port Facility Security Code.

The NDP had originally rallied their supporters to show dissatisfaction with the arrest and proffering of nine charges against Frederick on July 11.

The charges against the senator who is also a lawyer, relate to false declarations, swearing falsely, and fabricating evidence.

The charges were laid hours after a magistrate threw out six perjury charges against her.

All charges stem from the contents of affidavits that Frederick submitted as part of a private criminal complaint against Prime Minister Dr. Ralph Gonsalves following the December 2010 general elections.

But while opposition supporters were protesting against the Gonsalves government, the Prime Minister was not in the country.

He left for Cuba on Thursday to join in that country’s celebration of events marking the beginning of the Cuban revolution.

Gonsalves had suggested that the Opposition postpone the rally if they wanted to get his attention.

Eustace on Friday again said that Gonsalves, in making the suggestion, was “out of his damn place”.

Updates: This story has been updated to identify Anglican Priest Father Ulric Jones by name.

7 replies on “Thousands turn out to Opposition protest in Kingstown”