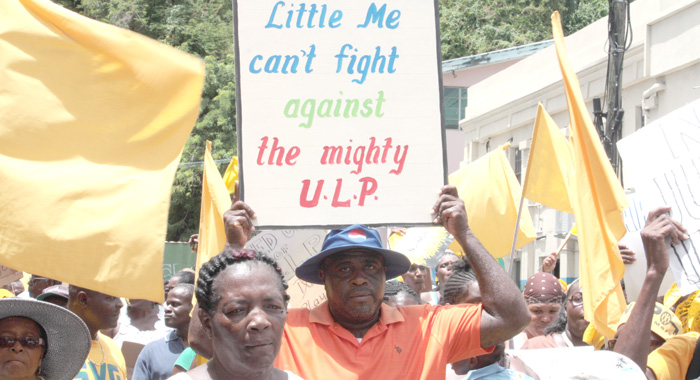 Businessman Leon Bigger Biggs Samuel participates in an opposition protest on July 26, 2013 He said on Monday that he wants a meeting with the government regarding a revoked mining licence. (IWN photo)

Businessman Leon “Bigger Biggs” Samuel says he will like a meeting with the government officials responsible for giving him back a licence to mine aggregate at Rabacca.

“I tell the Prime Minister this morning, I hold he and his Cabinet responsible. [The Chief Engineer] is only the tool,” Samuel said on radio this week.

Samuel’s licence was revoked in February 2011, bringing his concrete block-making business and EC$7 million in investment to a halt.

In revoking the licence, then Planning Minister, Clayton Burgin, cited a Planning Board technical committee’s findings of non-compliance with the terms of Samuel’s agreement and, among other things, offences against the environment.

The closure of the business has put some 60 persons on the breadline.

Samuel again took his case to radio this week when he was a guest of a programme to introduce a new, agro-processing business venture.

He said that he feels as if he is in some type of choreography involving Chief Engineer, Brent Bailey, and Prime Minister Dr. Ralph Gonsalves.

“… one [one] playing the music, and the other one is dancing me,” Samuel said.

“I don’t like that [and] that is the reason why I say let me just stop and when the people from the international body calls and ask, then I will be able to tell them I cannot advance further on this because such and such be the case,” he said in an apparent reference to foreign supporters of his new venture.

“… Because, what can be taking so long to make a decision to rescind the decision [to revoke my licence]?”

Samuel said that he wants to move his block-making plant from Yambou, in the interior district of Marriaqua, to Rabacca, on the eastern coast

He noted that the Yambou location is few minutes away from the Argyle international airport construction site and added that Rabacca is better suited for a block-making plant, because it is closer to the aggregate and could result in lower block prices.

But Samuel cannot move the block-making plant to Rabacca and set up the agro-processing business in Yambou, because the stop notice issued when his licence was revolved, prohibits further construction at Rabacca.

Controversy surrounds a road running through Samuel’s land at Rabacca, with the Chief Engineer saying it is public and Samuel saying it is private.

As the controversy escalated last September, the Chief Engineer order the relevant state agency to remove a gate Samuel had erected, thereby allowing farmers vehicular access to lands located above those that Samuel owns.

“The land at Rabbaca, as it is right now, is untouchable because of the stop notice that was given to us,” Samuel said.

He said that when the stop notice was issued in February 2011, it mentioned oil spills, and material from Samuel’s lands getting into the lady Jane River.

But Samuel said that because of the unstable nature of lands at Rabacca, material from all properties that boundary with the Lady Jane River will ultimately get into the river.

But he also said that the notice said “inter alia”.

“It is the inter alia part that is creating the problem, because Dr. Gonsalves [once] said … at Langley Park [that] there are two issues at Rabacca.

“There is one issue with land, which is the inter alia part. The inter alia is the one I having a problem with at Rabacca because persons intend to just push a road through my land at Rabacca, which I cannot allow to happen. Because, the land, as I said, is just big enough for me to relocate my block-making [operation] to Rabacca and putting a public road through my lands will just defeat the whole process. So I cannot allow that,” Samuel said.

He said that while the Chief Engineer can write a report suggesting it, the government official cannot order the revocation a mining licence.

“But he, the Prime Minister, and his cabinet, the buck stops right there. They could have said, ‘Well, … Brent, you [are] talking about shutting down a man’s business that a man has built from scratch. How can you really justify this? Can’t you go and work along with the man and see what can be worked out?’ But, no, they took the decision,” Samuel said of the Cabinet.

Samuel said that he had gone to see the Prime Minister, who promised “in good faith” that he call a meeting with the Chief Engineer.

“But I was wondering how he has them sitting with him and he didn’t invite me, because I want to have a meeting with all the stakeholders. But no [matter] how I try to get that meeting I can’t get that meeting, so I can watch everybody in their face and let they tell me what [is what],” Samuel further said.

“Since National Day of Prayer and nothing has happened up to now,” he further said.

The Prime Minister Dr. Ralph Gonsalves has said publicly that his government is not opposed to reinstating Samuel’s licences if he corrects the developments that resulted in its revocation.