Lawyer writes about arrest in NY; posts photos of bruises 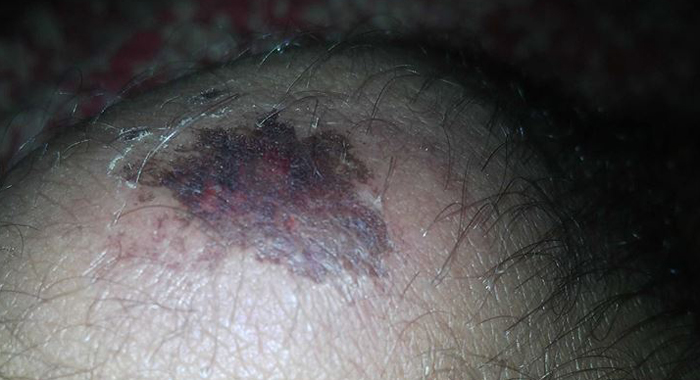 Prominent Vincentian lawyer and former senator, Ronald “Ronnie” Marks, says he is surprised by the way in which he and two other men were treated by police in New York Sunday night.

“I have never seen anything like this in my whole life. If somebody tell me that, I could never believe that human beings could be so wicked to one another,” he told I-Witness News by telephone around 7 p.m. Monday night.

“I am right now by the doctor, because they roughed me up real bad. They hurt my right shoulder. All three us, our shoulder [are] damaged,” he said in reference to the other two men who were also arrested.

Police in New York arrested Marks and two other men Sunday night and brought several charges against them.

They appeared in court on Monday and all charges were dismissed without the men having to plea, Marks told I-Witness News.

He said he suffered several injuries during the ordeal.

“My left knee bruise off, I have a bruise on my cheek, I have a scratch in back and they pull my right shoulder — like its out of place,” he told I-Witness News, adding that the will seek legal redress.

The lawyer wrote on Facebook about the ordeal around midnight Monday.

“Last night was to be my last night in NY before heading to visit my other relatives in Miami. My cousins Jen and Omari invited me to go to our friend Pitance for Karaoke but before that we decided to pass and check the netball. It was really great seeing some of my childhood friends and well missed family and everything was going great. The music was stopped shortly after 10 and we were all preparing to leave when I saw a young man from Layou being dragged by three huge policemen and one woman, as he passed I saw the dread in his eyes and he said to me “oh God Ronnie help me the police locking me up and I ain’t do nothing” I went to the female officer who was at the car that he was just flung into and asked what he did, she said “we told him to leave and he wouldn’t and on top of that he giving attitude. I said to the young man “Darren you should know better than that if you listen to the police they would arrest you” he said ” is not so it go Ronnie” then he was told to shut up, I said we’ll he is clearly sorry and he is not violent so maybe you can consider not arresting him. Two white NYPD officers came over the redhead one (John Swofford) said to me “what the f– [expletive deleted] are you doing there?(the public road) get to f– [expletive deleted] away” Darren then said “he is my Lawyer” I then declared that I was not called to the NY Bar and have no jurisdiction to practice here, but another who is so qualified was just nearby and I turned away from the officers and headed to the area where I last saw Colin Liverpool esq. as I was concerned with the brute force that was used on the young man and the violent demeanor of the officers as Darren is about 5’4″ and I doubt if his weight can make 3 figures, as I walked away from the officers and in full view of about 30 Vincentians the officers kicked my legs out from under me and 3 of them jumped on to me and hand cuffed me. Needless to say I was totally in shock and the Vincentians around began to bawl for bloody murder at what was happening right before their eyes I laid motionless on the ground with my hands behind my back while they handcuffed me and threw me into a police car, people started screaming and protesting that I was walking away from them and they had no right to tackle me in such a vicious manner a near riot broke out and they whisked Darren and myself in separate vehicles to the 77th precinct, later they brought Dj Kemie to the precinct as he too had complained in very strong language as to how they treated me and his fellow Layou man. Vincentians flooded to the precinct loudly protesting the flagrant abuse dished out to us. The trumped up charges laid against us could not stand up in Court in the face of the multitude of witnesses who camped out at the precinct until the wee hours of this morning, When Colin Liverpool confronted the DA with the truth he had no choice but to release us without even putting the trumped up charges to us. I read with disgust some of the political comments made by some in this medium, it never occurred to me to ask Darren what party he supported when I attempted to prevent the NYPD from the criminal abuse that he was getting, the officer left in charge of us also abused DJ Kemie and Darren in my presence by handcuffing them slamming them into the bars because they dared to protest that he was not taking them to the bathroom, it never crossed my mind to inquire whether DJ Kemie is NDP or ULP. A lady whose name I do not know was involved in a very heated political debate with me about 10 minutes the police tackled me to the ground but that did not stop her from passionately protesting the abuse from the NYPD, respect due Sister you need to tell your fellow NDP friends that there are things in life greater than Party politics, there were not NDP or ULP persons at the precinct standing up for us, there were Vincentians, thank you all for standing up for US we are all safely home and resting, but book it and sure WE NAR LEFF UM SO!!!!”

11 replies on “Lawyer writes about arrest in NY; posts photos of bruises”