On the decriminalising of homosexuality, Gonsalves willing to stand back 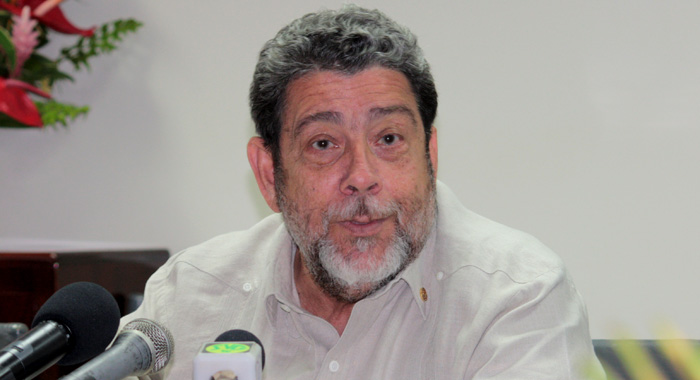 Prime Minister Dr. Ralph Gonsalves is willing to take the lead in the region on reparations and medical marijuana.

However, he says he doesn’t think a politician should lead the discussion on the decriminalisation of homosexuality.

“Now this is not a matter on which a politician should be pronouncing upfront, given the nature of this social issue, but for civic leaders to talk about, for newspapers to write and talk about and for them to raise it,” Gonsalves said at a press conference on Wednesday in response to a question about decriminalisation of homosexuality.

“I am not calling for people to raise the matter of same sex marriages because I consider that absolutely a bridge too far to cross,” he further said.

At the same press briefing, Gonsalves noted that his call this week was for a discussion on medical marijuana, rather than decriminalisation or legalisation of the drug.

He said that the proposed new constitution that Vincentians rejected in a vote in 2009, defined marriage as a union between a biological male and a biological female at birth.

Gonsalves said he has heard what the various Christian groupings say about homosexuality.

“… and people have come on either side of the questions,” he said, adding, “Some people have said that they are completely opposed to homosexuality, but that you must not criminalise homosexuality in private.”

He added that a clergyman in Antigua has said that both adultery and homosexuality are sins, but adultery is not criminalised.

“But that is a discussion which the church can lead, which the civic society can lead and it is interesting that a journalist is raising it, because you may well say if all uncomfortable questions are being raised for national discussion why not that question too,” Gonsalves further said in relation to the decriminalisation of homosexual acts.

“I don’t think it is an appropriate one on a values issue like this for a politician to be involved. And if a matter like that was to come to Parliament, I suspect that what you would have individual votes of conscience, rather than party lines….”

He said he would say the overwhelming majority of people in St. Vincent and the Grenadines oppose homosexuality and lesbianism on moral and religious grounds.

“But I think there are significant numbers of people — I don’t know who whether it is a majority — … who are saying there should be a discussion about whether the law ought not to be reformed in relation to homosexual or lesbian acts among consenting adults in private are to be decriminalised.

“In other words, you still frown on it on moral and religious grounds but you say what people want to do in their bedrooms is their business; the state ought not to be involved,” Gonsalves further said.

“But that’s a decision for the society to have, not for a politician, not for Ralph to start that discussion. That’s an entirely different subject than the one I am looking at on medical marijuana which I am looking at as an industry, something commercial.”

Gonsalves said that that because of the criminalisation of homosexuality, some people have “a cover of marriage” and it creates a lot of pain for themselves and their children.

“It opens the way to blackmail and even criminal violence, because of the criminalisation,” he further said.

He said that healthcare professionals in the areas of HIV and AIDS, and Professor George Alleyne, director emeritus of the Pan American Health Organization, have been calling for the decriminalisation of homosexuality.

“I am talking about consenting adults in private — that you assist in removing the stigmatisation on issues concerning HIV and AIDS as an activity which is predominantly among … homosexual males. That, of course is not the case, but the stigma exists,” Gonsalves said.

Gonsalves has also recently raised the issues of reparations from Europe for native genocide and slavery.

“… I know once I begin to open the discussion on reparations and medical marijuana that I anticipate that inevitably that question may come, as it has now come, and I can’t just duck it and tell you, ‘Nah, nah, nah; that is a question that I am not entertaining any discussion on and to just give a homophobic… response.”

He further said that while Christianity sees homosexuality as a sin, “we are to condemn the sin and not the sinner”.

He, however, added that some Christians would say they don’t consider homosexuality a sin.

He also asked how one would one respond to a gay or lesbian sibling who is a “good human being” in their work, interaction with their fellow human being, goes to church, and seeks forgiveness for whatever wrongs they may commit

“You are going to ostracise that person, treat that person as if they are an outcast? Jail that person?” Gonsalves said.

Meanwhile, head of the Tourism Authority, Glen Beache has called, in the past, for a change in attitude to homosexuality in light of the fact that tourism is the main revenue generator here.

Beache spoke of gay cruises and the revenue they are likely to generate.

When reminded of this fact and the reality that in this regard, the decriminalisation of homosexuality, like medical marijuana, also has an economic dimension, Gonsalves said: “The matter for medical marijuana is a direct issue of commerce and it’s not even at the first remove or the second remove, in the way in which you may address the question of lesbians and homosexuals who are tourists.”

He said that gay and lesbian visitors to this country would be expected to respect the nation’s customs and values.

“It’s an area where you have to balance issues with respect and tolerance.”

Asked how he would vote if a motion on the decriminalisation of homosexuality were brought to Parliament and lawmakers were encouraged to vote on conscience, Gonsalves said:

“… If I were to tell you where my conscience lies, I would preclude a lot of debate and discussions. But what is more important is for you to have a discussion as to how Ralph’s conscience is,” the Prime Minister said.

7 replies on “On the decriminalising of homosexuality, Gonsalves willing to stand back”