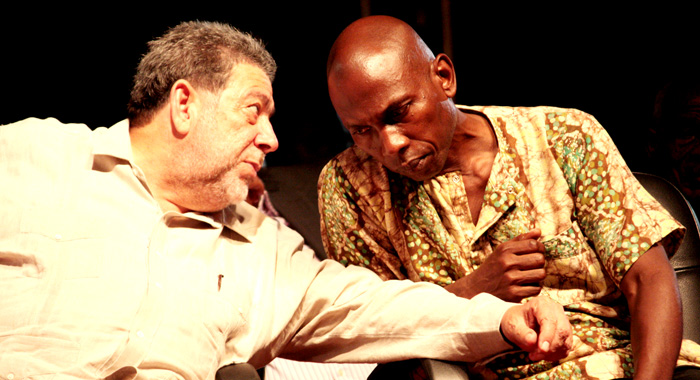 Political activist and social commentator turned senator, Jomo Thomas, says that when he was asked to become a senator for the ruling Unity Labour Party (ULP), he saw “certain things that I perceived to be problematic”.

Two weeks after he was asked on Aug. 29, Thomas, after consulting with several persons, accepted Prime Minister Dr. Ralph Gonsalves’ offer of the senatorial position.

Thomas, along with Camillo Gonsalves, son of the Prime Minister, and Luke Browne, who lost when he ran for the ULP in East Kingstown in the 2010 general elections, were today (Monday) announced  as ULP senators.

Thomas, in an interview on Saturday, told I-Witness News that when Gonsalves asked him to be a senator, he thought about it privately for two days.

“I must tell you that after the two days, I wasn’t sold on the notion, because I saw certain things that I perceived to be problematic,” Thomas told I-Witness News.

He said he later spoke with people who “showed me there is a contribution that they think I could make, that I should grab it and see how that would play out”.

Thomas said that after he weighed in on the ideas and reflected personally, he thought the “right decision” was to accept.

Among the “problematic” things, that becoming a senator could present, Thomas mentioned his “reputation in St. Vincent for calling a spade a spade.

“I have been able to say clearly and unequivocally, if I see something to be incorrect, that I would say it, irrespective of which side it comes down on,” said Thomas, who has been writing the “Plain Talk” column in The Vincentian newspaper for the past decade.

“The position of a senator presents a unique problem because you are going in as a senator for the governing party and some of the strident criticism, which I have become known for, I will not be able to be as strident and as vocal in public in the way in which I was before,” he further explained.

Thomas said that now that he is a member of the ULP team, he would have to be “much more moderate in how I say things.

But what if Thomas’ senatorial appointment, two years before the next general elections are constitutionally due, is intended to moderate his commentary, which includes the “Plain Talk” on IKTV and “Voices” on WE FM.

Thomas said that these two leaders, who are both in their late 60s, will not dominate the landscape forever and there needs to be “a new projection as to where the country needs to go.

“And I think if we get locked into the notion that it is intended to have me not speak, I know that is not going to happen. But it may not be speaking publicly with the stridency with which I spoke, but I will always speak to issues,” Thomas said.

“It (the senatorial appointment) does create some difficulty and I am not going to be naïve and say that it does not, but I’ve got to tell you we have to struggle for the soul of the country,” he further told I-Witness News.

Thomas said that one of the persons he consulted during the lead up to his decision said independence is “a luxury that we may not be able to have in small societies like ours”.

“He said, ‘The people who have independent positions, pride themselves on rigidly holding on to their independence. They will preach that point and die and never get a chance to effectuate policy in one way or the other’,” Thomas recounted.

“And that is an important point to make,” Thomas said.

He noted that while he would not say his writings in various publications over the last 30 years has not accomplished anything, “But I would have to conclude that if I had been closer to power that maybe the impact could have been greater and that, to me, was an important point….

“I can tell you further that if I have a fundamental disagreement on principle and I don’t think I am making headway within the structures, I would have to determine in my own mind and in my own conscience how I deal with it. But I think that is the case for every human being. And, if and when that eventuality comes, I would deal with that,” Thomas said.

Thomas, this year, resigned from the National Heroes Selection Committee, saying that a speech by Gonsalves had “irreparably coloured and influenced the debate” and made the work of the committee “superfluous”.

Thomas is a lawyer and he said that another of the “problematic” things that he perceived relates to his law practice.

“It wasn’t a big part of my practice, but because of the way I was perceived by the public, some people thought that if there was a particular kind of case, that they want me to perform as a lawyer.”

He said that people may now believe that he may not want to take, or may not be the best to argue those kinds of cases.

“I’ve got to tell you that I see a fundamental difference between my role as a lawyer and my role as a ULP senator, or my role as somebody who may be asked, from time to time, in Parliament to support a given position of the Unity Labour Party,” Thomas told I-Witness News.

He said there is “a dangerous thing” in SVG where people have become known as ULP or Opposition lawyers.

“I might be a lawyer who is a ULP senator but I’ve got to tell you I will not be a ULP lawyer,” Thomas said,

He said, for example, that the case of the Collective Agreement between the Teachers Union and the Government, “would resolve forever, legally, a fundamental question having to do with construction and understanding of the Constitution.

“I think that is an issue for everybody,” Thomas said.

He added that lawyers in Trinidad and Tobago and the United States are on different sides on different issues at different times.

“But, the law, to me, is so fundamental that lawyers should see it as their cardinal duty to make sure that their efforts are placed toward clarifying the law.”

Thomas, who is 55 years old, said he has been involved in politics “virtually all my life”.

He said he got involved in student politics around age 13, “and I have never stopped”.

He was head of Vanguard Youths, the youth organisation of the Youth Liberalisation Movement (Yulimo), and from around 17 years old, he became a member of the central committee of Yulimo.

Thomas lived in the United States for 21 years, and he said during that time, he was actively involved in anti-racial struggles, struggles for civil rights and political rights, and advocated on behalf of political prisoners.

“So I have had an active political life and I have a whole host of ideas as to how St. Vincent, the region and the world should run.”

He said that because of the international strictures, SVG might not have a chance to take “a great leap forward unless we find some precious metal or oil coming out of the sea or some place sometime soon.

“So, one of the things I would like to see is to commit — and I am talking [about] the people of St. Vincent — to making St. Vincent the best run, best-governed developing country in the world.

Thomas said part of this relearning is the realisation that different people have different positions and policy ideas and want to be in power.

“But we need not spend a lot of time with the vitriol, … because, a lot, a lot of conversation in St. Vincent, if we can call it that, is where we are shouting at each other, rather than engaging in a policy debate or policy discussions, where, at the end, the population can say, ‘I think [Person X] presented a better argument.’

“I am persuaded. That doesn’t happen. It is as if we are throwing read meat at our supporters, who are almost, in Pavlovian sense, [sure to] lap it up.”

Thomas also describes himself as a true regionalist.

“I think we need to do much more work in trying to unite the Caribbean. I think too many of our leaders think these are almost feudal estates that they have almost total control over. I think we have to give up some of that territorial hegemony in order for the region to go forward,” he said.

Not yet a ULP member

But even as Thomas took the Oath this morning, he was not a member of the ULP.

“I would join. I have not signed a card but I would join,” Thomas told I-Witness News, adding, “Back in 2005, I attempted to join but I think some folks in there didn’t want me to join.”

He now thinks they want him to be a member of the party.

Thomas’ name emerged late among those which were being bandied about as potential senators.

The three new senators are replacing former foreign secretary, Dr. Douglas Slater, former parliamentary secretary in the Ministry of Youth and Sports, Elvis Charles, and former deputy speaker, David Browne, who had their last day as senators on Aug. 15.

The Prime Minister had told Parliament that he would have named the new senators by the end of August.

Asked about the other names that had been mentioned before he was asked on Aug. 29, Thomas, said:

But did Thomas ask for anything?

“I had a number of conversations with the Prime Minister regarding what I would like to see, the vision I would have, regarding where I would fit in to all of this and how we can help.

“I thought, let change come through the marketplace of ideas, where you discuss. … I think that in the process of policy percolation, it should not be that because a person may have a shade or variance with you that that person is immediately perceived to be someone else, on the other side or an enemy.”

Thomas said he thinks that the ULP is very guilty of that.

But how would he change that?

“I may not be able to change that but I will weigh in on the conversation and try to weigh in as forcefully as possible,” Thomas said.

Regarding the political divide, Thomas said it is “horrible”.

“The parties, both of them, want to have a dictatorship of their views and opinions and they try to shout you down. And I think that people can best be able to respond if they are armed with information and not depend on the parties to give them the information for which they would make a decision. … That is in the best interest of not only the person but also the best interest of the country,” Thomas told I-Witness News.