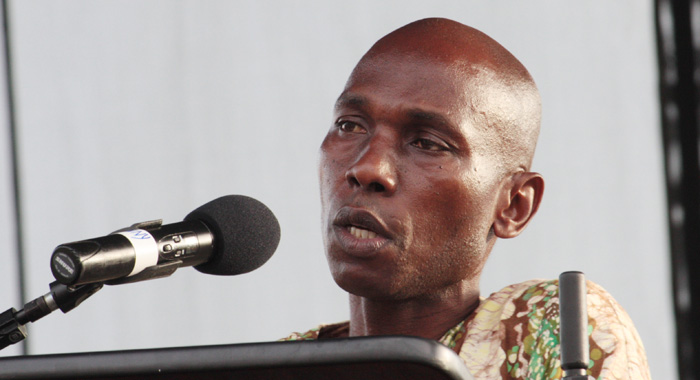 Is the appointment of political activist and social commentator, Jomo Thomas, as a senator for the Unity Labour Party, the first step to his becoming an election candidate?

The next general elections are constitutionally due in December 2015 and Thomas told I-Witness News on Saturday that is it “early season yet”.

Asked about speculations that he is a potential candidate for the ULP in South Leeward, Thomas, who lived in the United States for 21 years, said:

“Well, I returned to St. Vincent in 2004 August and I have lived in South Leeward all of that period. … I am not originally a South Leeward person; I am from Murray’s Village, but I have planted some fairly good roots in South Leeward and the decision as to if and when I am to run, where I would run, is not cemented. The realm of possibility is infinite,” he said.

The ULP’s candidate, David Browne, failed to win South Leeward for the party in the 2010 general election. Browne was among the three senators replaced last month, thereby suggesting that he might not be a candidate in the next election.

Thomas said that both the ULP and the opposition New Democratic Party (NDP) have been making overtures for a long time.

He said these overtures have not been made directly in the case of the NDP and it might not have been the position of the party.

In 2010, there was an active effort to get him to run in Central Kingstown for the ULP, Thomas said, adding that that effort “might not have come from the top”.

“I would say, the last year or more, the Prime Minister has been insisting, ‘Look, I think you need to embrace competitive electoral politics because, even though you speak, you may not have a chance to impact on policy and policy decision and developmental issues in the same way as if you were actively involved and are part of a structure that controls the direction of the country,” Thomas said, when asked how Prime Minister Dr. Ralph Gonsalves pitched the senatorial offer.

“And the point was made about trying to transition the party, to bring in a set of younger, attractive persons, well educated, hopefully thinkers who can take policies and run with them,” said Thomas, who is 55 years old and holds degrees, in law, journalism and political science, and international affairs and political economy.

“That, to me, was a point as well that I thought was a selling point that was reasonable. And I decided maybe the decision should be made, and this time around, when the offer was made, I thought about it,” Thomas told I-Witness News.

Thomas failed in his attempt in 2005 to join the ULP and he told I-Witness News he got a sense that some members of the party didn’t want him to join.

In 2006, he was fired as chief executive officer of the Social Investment Fund.

He said that while the ULP propaganda was that he had walked off the job, he had applied to the board of directors for leave to undergo some studies in Trinidad.

But Thomas also thinks that his forthright commentaries might have contributed to his dismissal.

“There was this feeling that we gave this man a job and he came back and he was being critical of the government,” Thomas said.

“I didn’t feel as though I was given a job. I felt I was asked to do the job because when I interviewed for the job I was the best person who had [been] interviewed and had the necessary skill set to do the job.