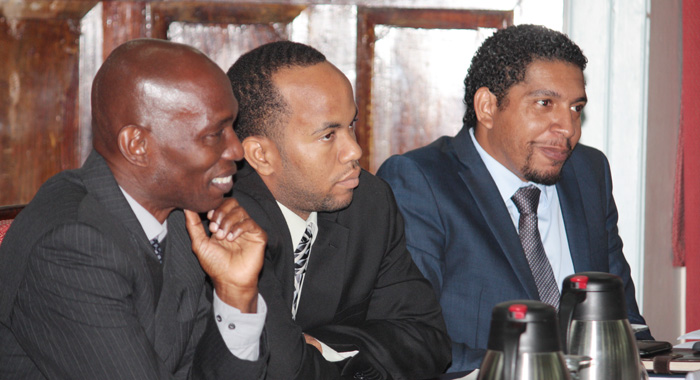 The three new senators for the Unity Labour Party government were on Thursday warned that Parliaments are “difficult and unforgiving places”.

Gonsalves, the longest-serving Parliamentarian among the current group of lawmakers, issued the warning as he congratulated the new senators.

Senators Gonsalves and Thomas are lawyers.

Gonsalves, who is also a lawyer, said that when he started to practise law, an old man told him that if he has the law on his side, try and get the judge’s attention.

According to the old man’s advice, if the facts are on your side, your face should be kept firmly connected to the jury. But if you have neither the facts nor the law, you bang the table.

“Well, this is one place, if you bang the table, the Speaker is likely to ask you to leave for misbehaviour,” Gonsalves said.

“The point is that you do your work properly,” he said.

He told the senators that for those who want to contest elections, no one can give them a seat.

Gonsalves further said that persons who aspire to be candidate in national elections “have to go to the people and talk to them on an on-going basis.

“A man may be a good lawyer, he may be an excellent lawyer in all sorts of fields, from banking to insurance to the offshore industry but doesn’t have a clue about politics,” he said.

He further suggested that a good candidate must be sincere and a good listener to people’s complaints.

“These are qualities which must be displayed and to have patience. And I tell those who sometimes as soon as they wet their feet they get overly ambitious — and I make this point for every single political personality on this side of the House and on that side of the House — there is a saying in the Catholic Church that once you sing in the choir, you can be pope, and therefore the papacy is not outside of your reach if you have been singing in the choir for a while.

“But the ambition inherent in that proposition is restrained by the words of a beautiful hymn. And I think Sen. [Linton] Lewis knows this hymn well: ‘The good Lord shows his face on he who waits his turn.’

“ So, … I give as much advice as I can in this short presentation, Mr. Speaker,” the Prime Minister said.

Sen. Lewis, an opposition parliamentarian, is chair of the New Democratic Party.

One reply on “Parliaments are ‘difficult and unforgiving places,’ PM tells new senators”