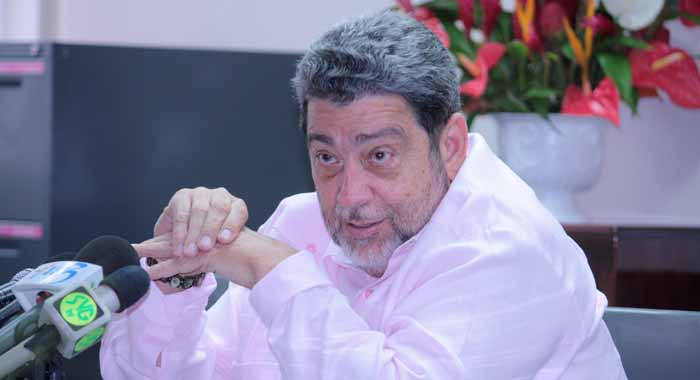 Attorney General, Judith Jones-Morgan has asked the court to set aside a temporary order that a student reportedly expelled from a high school return to classes there until a lawsuit is heard.

“I have been advised by the Honourable Attorney General that an application has been made, it was filed on Friday, to have that order set aside,” Prime Minister Dr. Ralph Gonsalves said Monday.

The statement by Gonsalves is the first by a government official since the development, which came to the fore last week when teachers of the St. Joseph Convent Kingstown (SJCK) walked off the job in protest against the student’s presence there.

The teachers also called in sick on Wednesday but returned to the classroom on Wednesday and the student was placed in a class that is different from the one she was reportedly assigned to in July, at the end of the last school year.

During the past week, a sketch of the situation has emerged through various communications to and through the media even as the Ministry of Education (MOE) has remained silent.

I-Witness News understands that the student was expelled from the Catholic school, a government-assisted institution, last year after making a rude comment about a teacher.

The MOE is said to have assigned her to the Emmanuel High School Mesopotamia.

Jomo Thomas, lawyer for the mother of the Form 4 student, applied to the court and received an order preserving the status quo until the lawsuit against the principal of the school, MOE officials and the MOE itself is heard.

Gonsalves, who was out of state last week, told a press briefing in Kingstown on Monday that he has been informed that the hearing of the Attorney General’s application will take place on Friday.

He explained the reticence of the MOE, which is headed by Deputy Prime Minister, Girlyn Miguel, a former headmistress.

Gonsalves said the Minister of Education would have wanted to have her communications “away from the glare of publicity, lest anything which is said could be misinterpreted.

“It is better to be criticised to say you are not saying anything than to speak in a manner which would in one way affect the child’s welfare,” Gonsalves said.

He said that even as persons express their opinion on the controversial case, the welfare of the student must be of principal importance.

“Now, different people will have different opinions and anybody who has taken time out to familiarise themselves with the issues, anyone who has a sufficiency of interest in the matter, will have an opinion, but let us allow the determination by the court.

He said that the MOE has an “obligation” to provide students “a place in an appropriate educational institution” and is always prepared to do so.

“… the failure and or refusal, reluctance, to say anything thus far ought not to be held against them (the MOE) in any way at all.

He also announced that another judge will hear the AG’s application, since Justice Frederick Bruce-Lyle, who had heard Thomas’ ex parte application, has recused himself.

“I was informed that Justice Bruce-Lyle’s wife is on the board of St. Joseph’s Convent,” Gonsalves said.

“So, upon that realisation, probably if he (Bruce-Lyle) had realised it at the time, he probably would have recused himself,” he explained.

Gonsalves further said that the MOE is not in control of the management of SJCK.

“But, clearly, the ministry has an obligation to provide a school for a child if a school, for whatever reason, says we don’t want to have this child,” Gonsalves further said.

“I can’t comment on the rights or wrongs of what any party did in this matter because there is an adjudication to be made by the judiciary,” he told reporters.

The Prime Minister further defended the lawyer, Jomo Thomas, who was recently sworn in as a senator for the Unity Labour Party, which Gonsalves heads.

“He is a lawyer. He brought a case. A citizen feels that she has a grievance and that she wants that grievance to be legally redressed, she goes to a lawyer of her choice, which is her right.

“The lawyer put the matter in court, the lawyer does not determine cases, he is the conduit to go to the fount of justice,” Gonsalves said.

“Now, let us wait and see what happens on Friday. In the meantime, the school did clearly the correct thing by abiding by the first order of the court. But this does not take away any democratic right of the teacher or parents of anyone else for that matter to express their opinion…

“Sometimes when conflicts arise, we have to allow the institutions which we have set up as a civilised people to resolve the conflicts,” Gonsalves said.

(Read our extensive coverage of this story)