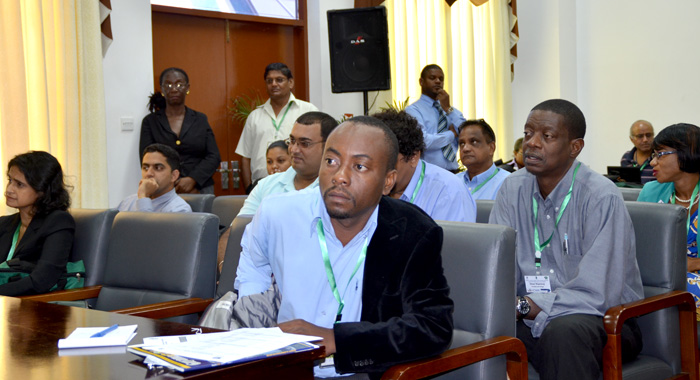 Media participants at the media workshop in Guynana.

The regional media is being called upon to do more to highlight agricultural issues, even as practitioners have been commended for their role in fighting HIV and non-communicable diseases (NCDs).

The call came from Guyana’s Minister of Agriculture, Dr. Leslie Ramsammy, on Friday at the beginning of a regional media workshop in Guyana on agriculture and development.

Ramsammy said he is proud of the way the media has developed in the region.

He added that as a former minister of health, he is extremely happy about the way in which the media has built capacity in informing people about, reporting on, and keeping accountability in the fight against HIV and the struggle against non-communicable diseases.

“But I can’t say that I am similarly proud of the way we have covered and reported on agriculture,” he said.

The average Caribbean citizen is unaware of the Jagdeo Initiative and its important to the Caribbean and what has happened since its proposal, Ramsammy further said.

The Jagdeo Initiative identifies and defines key, crucial and binding constraints to agricultural repositioning in the Caribbean and aims to develop and implement targeted, focused and practical interventions at both the regional and national levels to overcome the constraints.

“And I have heard many reasons why reporting and coverage of the Jagdeo Initiative has been marginal at best. One is that the authorities don’t talk much about that…” he said, adding that he speaks about the initiative frequently.

Ramsammy further said the Jagdeo Initiative is often reported on from “a myopic perspective”.

“We need to change that,” he said.

Regarding the Economic Partnership Agreement (EPA), Ramsammy said this is “jargon” between the requisite authorities.

He further stated that in theory, the EPA provides for reciprocal access to markets.

“But when you take into consideration the fact that you have a very developed region with developed capacities, for example, in sanitary standards, laboratory requirement, etc., compared to the rudimentary development of these areas in the Caribbean, it is an agreement that leaves one of us disadvantaged. … And we haven’t made our people understand that.”

Ramsammy said that agriculture in the region is about food.

“And we should be proud of the fact that this region has the potential to be… one of the first sub-regions in the world to be a hunger-free region.

“Yet, we do have the scandalous situation where … food insecurity does affect eight million people in our region, a region that has the potential even now, even at our level of development now to ensure that no one goes hungry.”

The media, Ramsammy says, has not examined why such a situation exists.