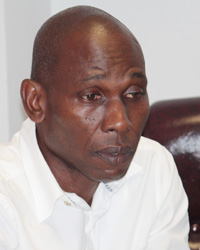 The lawyer for the mother of the 14-year-old St. Joseph Convent Kingstown (SJCK) student at the heart of the on-going legal battle says the atmosphere at the school has been poisoned against the fourth-former.

Students at the private Catholic school exchanged their books for placards and took to the schoolyard on Monday to protest the presence of the teenager at the institution.

Justice Gertel Thom ruled in court on Monday that the student must leave the school until the outcome of a lawsuit set to be heard on Nov. 15.

Her ruling overturned a temporary injunction granted by Justice Frederick Bruce-Lyle on Sept. 20 and upheld by Justice Wesley James on Friday, that the student remains at the school while the lawsuit is pending.

“I think the real problem here is that the school administrators have so poisoned the atmosphere at the St. Joseph’s Convent Kingstown against this young child,” Thomas told I-Witness News on Monday.

“And more importantly, it is not just the child, but the mother; because, for them, how dare this mother stand up for her child, because what they (the school) have relished and lived on over all those years, a child transgresses and the parent comes to the school and insults and brutalises the child,” he further said.

The student was reportedly expelled from SJCK in July, four months after she is said to have written in a workbook a rude comment about a female teacher.

“The administrators did not want to hear that and so they made a push to give this woman a bad rep. She is a very dignified woman. She is not an ideologue, she is not an unreasonable woman but she probably did what will redound to the benefit of so many children in St. Vincent and the Grenadines, because I do believe that from here on in, teacher-student, parent-school administrative relationship will not be the same again.

“I think that the administrator in the school must be on their P’s and their Q’s about how they document information about students. I think children are going to understand that ‘Look, this could be very difficult for us and we will have to act in a particular way’ and parents would become empowered to know that once children are dealt with in an unsatisfactory way that they have recourse to the court,” Thomas said.