Judge rules that student must leave Convent until lawsuit is heard 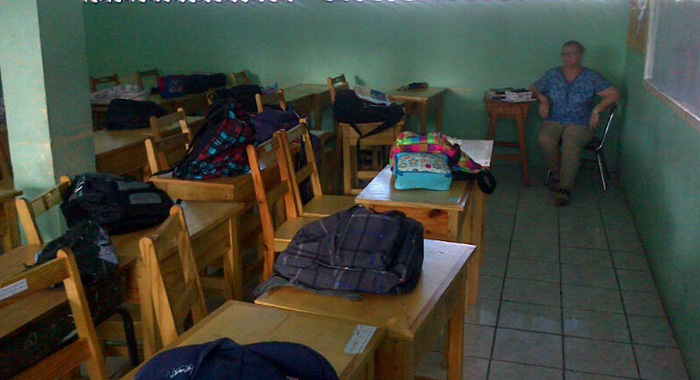 A teacher sits in a classroom while students protest at SJCK on Monday. (Photo: Z.S. Lewis/Facebook)

A judge on Monday lifted the injunction that allowed a 14-year-old student to continue her education at St. Joseph’s Convent Kingstown (SJCK) until a lawsuit her mother filed against the school is heard on Nov. 15.

Justice Gertel Thom gave the order but told the parties that she will give the reasons for her decision in a written judgement.

The developments on Monday were the latest in the legal acrobatics surrounding the Form 4 student, who is said to have written a rude note about a female teacher in March.

Reports are that the student was transferred to the Emmanuel High School Mesopotamia (EHSM) in July.

However, lawyer Jomo Thomas, acting on behalf of the girl’s mother, sued the principal of the school, Calma Balcombe, two Ministry of Education (MOE) officials, and the MOE itself.

Justice Frederick Bruce-Lyle ruled on Sept. 20 that the student continues classes at SJCK until the lawsuit is heard.

Justice Wesley James upheld the injunction on Friday against an application by Attorney-General Judith Jones-Morgan that it be overturned.

But Thom on Monday lifted the application.

Earlier on Monday, students at the SJCK, armed with placards, took to the schoolyard in protest as they made it known that they do not want the 14-year-old as a schoolmate at the Catholic school.

“I understand the ruling because based on the orchestrated events of today at the school, I think the judge would have been hard-pressed to rule otherwise,” Thomas told I-Witness News of Thom’s ruling.

“I speak with scientific certainty when I say it was orchestrated,” he said when quizzed.

“There was a court ruling on Friday and because the ruling went against them, the lawyers filed for another action and they decided to make the school environment inhospitable for that child,” he further told I-Witness News.

On Sept. 23, the first school day after the judge ordered that the student remains at SJCK, teacher walked off the job in protest and stayed away from the classroom the following day.

They returned to classes on Sept. 25th and placed the student in a form said to be differnt from the one to which she was reportedly assigned in July — the end of the last school year.

“You have got to remember when they first ordered the child into school on the 23rd, rather than obeying the court order, the principal, teachers and certain members of the parent-teachers association had a meeting planned and closed the school down,” Thomas told I-Witness News.

He further said that the student went to class at SJCK every school day between Sept. 25 and Oct. 4 (last Friday).

“But on the 4th [of October], when the court ruled against the administration, they decided that they are gong to make the school inhospitable,” Thomas said.

“What is unfortunate, they used children between the ages of 11 and 15 to carry out an act which is immoral and all of those teachers and all of those adults who engaged in that kind of action against a 14-year-old girl should be ashamed of themselves,” he said of the protest earlier on Monday.

Tjomas told I-Witness News that he has not spoken to his client on the question of appealing the ruling today.

“As it stands now, that (EMHS) is where she is transferred to. I don’t know what is going to happen,” he said when asked if the student will attend classes at EHSM.