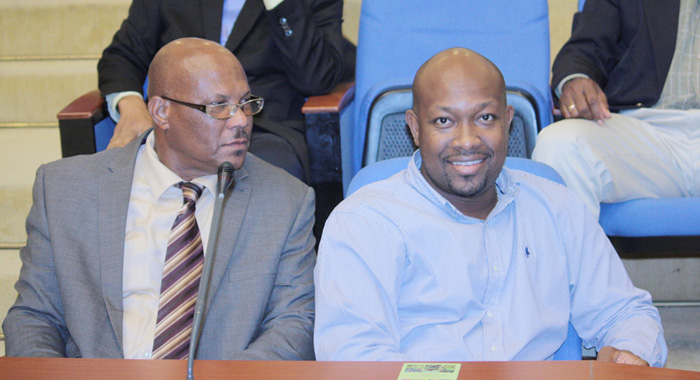 The pledges by the Ministers of Agriculture of Guyana, Dominica, and Grenada came at the end of a week when the importance of research and development to the agricultural sector was repeatedly emphasized.

Chair of CARICOM’s Council on Trade and Economic Development (COTED) on Agriculture, Grenada Minister of Agriculture, Roland Boulder, told a press briefing that his CARICOM counterparts have concluded that enough has not been done to move the sector forward and ensure food security.

However, when asked about the extent of the CARICOM nations’ deficit in contributions to CARDI, Boulder said, “I don’t think I am at liberty to tell you what the COTED [discussed].

“But what I can tell you, for those various islands that have arrears, some of us have already made specific arrangements with CARDI and that is being paid over a period of time. Others have given definite dates by which they will have their arrears paid,” he further stated.

But Dominica’s Minister of Agriculture, Matthew Walter, was more forceful saying, “… that information you are seeking is confidential information and it can’t be disclosed by us…”

He however said CARDI “is here to stay”.

“I want to allay the fears of anybody who thinks that CARDI would disappear,” he said, adding that CARICOM leaders in June all came to the consensus that CARDI is “an indispensible body and it is the only research and development institute in the Caribbean…

“Hence, the importance of the commitment for every single member state to ensure that they pay their dues,” Walter further said.

He said a payment plan is in place “for every country, those who are experiencing financial problems, to ensure that they pay their arrears gradually.

“In other words, CARDI is here to stay and we are going to ensure that CARDI is properly streamlined to deliver goods and services to the member states of CARICOM with respect to development,” he reemphasized.

Asked to speak about whether their respective countries are current in their contributions to CARDI, the minister each admitted that they are in arrears.

Guyana’s Minister of Agriculture, Dr. Leslie Ramsammy, pointed to CARDI’s annual report, saying he believes it is published on the institute’s website.

However, as of Saturday morning, the most recent report on CARDI website was that of 2009.

Ramsammy said that Guyana is “not current” in its payment to CARDI but, like his two other colleagues, said he could not remember the extent of the amount due.

He further noted that Guyana some years ago “suspended its participation in CARDI”.

“That’s not confidential information, that’s well known. And I am not going to discuss here whether there were good reasons or bad reasons for that said Ramsammy, who, unlike his Dominican colleague, said CARDI is not the region’s only agricultural research agency.

“But Guyana has accepted that whilst we had concerns, that throwing the baby out with the bathwater was not an option,” he further said, adding that Guyana has always been convinced that there is a place in agricultural development and the development of the region for CARDI.

Ramsammy, who became Minister of Agriculture in November 2011, said that after his appointment, he began talks with Executive-Director of CARDI, Dr. H. Arlington Chesney that led to the resumption of Guyana’s participation in CARDI.

“Those terms of reference for our resumption, among other things, was that Guyana will pay its full quota for 2013 and the Ministry of Agriculture is making those arrangements right now to complete that,” Ramsammy said.

Meanwhile, Boulder said that Grenada was in arrears “by a year, I think”.

“An arrangement was entered into with CARDI as to how payments will be made over a period of time, trying to keep the years to come current while we pay the arrears that are behind,” he said.

Asked if he had a figure of how much his country owes, Boulder said, “No sir, I do not have a figure in my head.”

And, Walter restated Dominica’s commitment to CARDI as “a significant research and development institute.

“Recently, we made payment to CARDI and we are willing to put in place a payment schedule. This has been discussed with CARDI to be able to cover the arrears that we owe CARDI. But, certainly, we are not going to allow CARDI to suffer financially. It is the collective intentions of all the members here to ensure that CARDI stands firm on its feet,” he said.

Meanwhile, Chesney said in an interview after the press briefing that St. Vincent and the Grenadines was also not current in its payments.