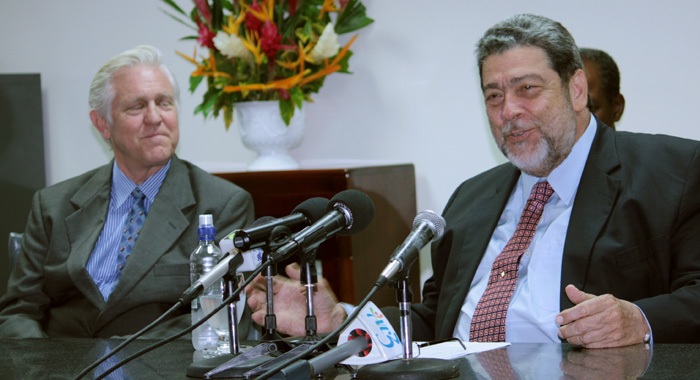 Prime Minister Dr. Ralph Gonsalves got a ringing endorsement from the Clinton Climate Initiative as this country launched the testing phase of the geothermal project on Friday.

“Your welcome and your leadership has attracted us in a way I think redounded to the benefit of Vincentians everywhere and we are proud to be identified with you on this project,” Jan Hartke, global director, Clinton Climate Initiative-Clean Energy, said at the launch.

Gonsalves, speaking at the launch, said that the Clinton Climate Initiative is partnering in the project by “lending their prestige and lending their technical support”.

Hartke said that when former US president, Bill Clinton — who, along with his wife, former U.S. Secretary of State, Hillary Clinton, and their daughter, Chelsea Clinton, heads the Clinton Foundation — first started the idea of reaching out to islands, he was concerned about the high cost of electricity and the impact of climate change.

He said that while they have “an enormous amount of support and wind to our back working for this foundation”, it still has to choose where it applies its most significant efforts.

“And I can say now that even though I know that President Clinton has enormous affection for you (Gonsalves) and I know he has a long history of admiration for the progress you have made on issues like education, which you and he share concerns on, but I will also say that he is aware and I have become aware, our team has become aware of really what is the magnificent political willpower that you are demonstrating in making this project go from a dream into a reality,” Hartke said.

He said it was important to attract companies that are “not fly-by-nights but some of the strongest, most experienced companies in the world”.

Emera, an energy and services company with US$8 billion in assets and 2012 revenues of $2.1 billion, which has electric utilities in the North-eastern United States, Atlantic Canada, St. Lucia, Grand Bahama, and Barbados, is also partnering in the project.

Hartke said it is not always easy to get the biggest companies in the world to come to a small island.

“But, because of the frankly charismatic and serious leadership, Prime Minister, that you have exercised, you were able to bring them here. There wasn’t anybody really better in the world than Reykjavik Geothermal with the experience they have had in Iceland. You bring in a company like Emera, it is a powerful company and their shareholders want to see them do green. We are not trying to pull them into an area they don’t want to be. They are trying to support this kind of a cause,” Hartke further said.

In St. Vincent and the Grenadines (SVG), domestic consumers pay about US$0.40 for a kilowatt-hour of electricity.

Hartke said that the Clinton Climate Initiative is rallying around the geothermal energy project, adding that the reality is that a country like SVG only has two choices as far the question of high electricity rates is concerned.

“You can either look out across the landscape of St. Vincent and the Grenadines and say why we don’t just stand pat and let the people suffer and let the businesses try and figure out how they can make a living, how hotels can stay in business with high electricity cost, or you can say let’s launch a new, as he calls it and I call it, a game-changing technology that can take the leadership not only here to help people here locally but can become a beacon around the Caribbean,” Hartke said.

“I have added my team’s full support for you. We are not in it temporarily, we are in it ‘till it’s done and we are just so proud to be identified with a leader with your kind of knowledge, your kind of fortitude, and your kind of concern for the average person who I have seen demonstrated again and again in this country,” Hartke said.