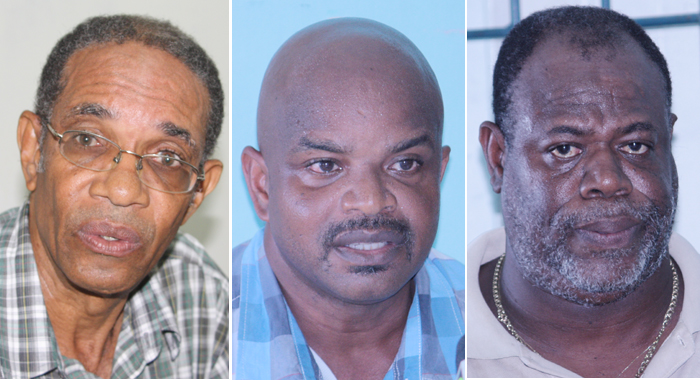 The factions within the Public Service Union (PSU) continue to use the media to spar with each other ahead of a court ruling later this month, regarding the removal in September of Cools Vanloo and his executive from the helm of the Union.

On Monday, Elroy Boucher, head of the interim committee now leading the union, told a press conference that the “flawed” nature of the Union’s electoral system resulted in Vanloo being re-elected to a third term as president in 2011.

But Vanloo defended the system on Tuesday, telling I-Witness News that the same system was used when Boucher and each member of the interim committee were elected to executives of the PSU in the past.

“The system isn’t flawed, because it is the system that has been used for the past 65 years, where Boucher, [interim committee member, Aubrey] Burgin, all the members on the interim committee were elected by the same system.

“So, how come all of a sudden it has become flawed? My election was unanimous following a vote of no-confidence that was brought by Elroy Boucher and Joel Poyer in 2011,” Vanloo said.

He said the no-confidence motion was resolved by a regional trade unionist, who pointed out that the PSU constitution does not provide for votes of no-confidence.

“And he instructed the gathering that the president shall serve until his term is expired,” Vanloo said

“But it would appear that the two gentlemen, having been defeated at the last elections, are not satisfied with the wishes of the membership, and who now have chosen to impose themselves on that membership who has rejected them,” Vanloo further told I-Witness News.

Asked about the development in which a special meeting of the PSU in September reportedly recalled him and his executive, Vanloo said: “I don’t want to deal with that. That is a matter before the court.”

The court is scheduled to hear today, Wednesday, an injunction Vanloo filed requesting a stay of elections of a new Union executive, pending the outcome of a lawsuit he also filed.

The election was scheduled to take place yesterday, Tuesday, but the interim committee has postponed the vote pending the outcome of the lawsuit, which is scheduled to be heard later this month.

“That is a matter that the court has to decide on, as to what transpired at the meeting and … who is right and who is wrong,” Vanloo further told I-Witness News.

“We are only hearing one side of the story, they (the interim committee) have taken a PR [approach] on this matter. I am awaiting patiently the outcome of the decision of the court in terms of the interpretation of this matter. So I can’t say anything on that matter,” he further said.

Vanloo said that prior to the development in September, “there was another previous situation where both gentlemen (Boucher and Poyer) attempted the same thing.

“It failed, and they lost. And I want to say they are sore losers. The members have to elect a president in the next four or five months. Why can’t they wait? What’s the hurry?” Vanloo said.

At the press conference on Monday, Boucher highlighted some of Vanloo positive attributes, including his knowledge of the Public Service regulations and his unrelenting advocacy on behalf of aggrieved members.

He, however, accused Vanloo of being dictatorial, saying that in 2009, Vanloo did not want the Union to participate in the national constitutional reform exercise.

But a journalist at the press conference noted that Vanloo was re-elected after the constitution reform exercise was completed.

“I wouldn’t want to speak to that,” Boucher said.

“Maybe you should,” another journalist said.

“That speaks to the flaw of how we hold elections at this Union and for a number of years, there are some of us who have been arguing that elections should be held throughout all of the departments that we have members,” Boucher said.

“The very small numbers … elect executives to govern a Union that has 1,500 or so members. And sometimes you have less than 100, sometimes less than 50 persons making that decision. It is a flawed process,” the former executive member said.

Fewer than 40 members of the Union elected the interim committee at a special meeting in September.

Asked if it was not that same “flawed” system that allowed him to be chair of the interim committee, Boucher said: “You can say that. That is the case also. That is why we have recognised the problem, we have made attempts to get it change in the past but have gotten nowhere.”

He said the opportunity to rectify the system

“will come when, I am sure, the next executive, having learnt from all of this, will try and make the changes that are necessary to ensure that elections are no longer held in that manner”.

He said that the Teachers’ Union many years ago moved away from the system still used at the PSU, and has elections in all the schools over a two-day period.

“So that when members vote, you know that 75, 60, 80 per cent of the members are voting to elect the executive and it is a broad process that you are likely to get the best people to run the organisation,” Boucher said in relations to the Teachers’ Union.

He said Vanloo was president of the Union for eight years, and while Union members have complained about the electoral system, it has not been changed.

“Is it because it suits him at that particular time? If you are so interested in democratic processes and people being able to have their say, won’t you attempt, at least, something of that nature to have it changed?”

Boucher further said that when he was an executive member of the union –under the leadership of Aubrey Burgin (who is also on the interim committee) — the “flawed” nature of the electoral process was acknowledged.

“We set up a committee to look at constitutional reform … then when Mr. Vanloo came on-board, that committee was [shelved].”

He said that four years ago, a resolution was brought to a general meeting to amend the Union’s constitution and change the voting process.

“That was killed in a meeting right at Red Cross. Killed dead by the very said president (Vanloo),” Boucher said.

Poyer, another member of the interim committee, explained what transpired then.

“Because with these sorts of resolution, you have to notify the membership by a certain time and because that procedure was not followed, he (Vanloo) did not allow the debate on it as the chairperson and it died there.”

Boucher said he is confident that if the system were different, Vanloo would not have been re-elected as president of the Union in 2009.

“Categorically, I cannot see how that would have happened,” he said.

He, however, said that it is wrong to interpret the disbanding of the executive in September as his taking actions to remove an inappropriately elected president.

“No, that was not so. The membership spoke at a meeting. They are the ones, not us, who saw the problems with an executive that could not hold things together,” he said.

But notwithstanding the developments Vanloo has not ruled contesting elections to be Union chief again.

“I can’t say. I don’t know if the membership would ask me to contest the elections,” he told I-Witness News on Tuesday.

Asked if he would contest the elections if Union members so requested, Vanloo said: “I don’t know. I can’t say. It depends on the outcome of this matter.”